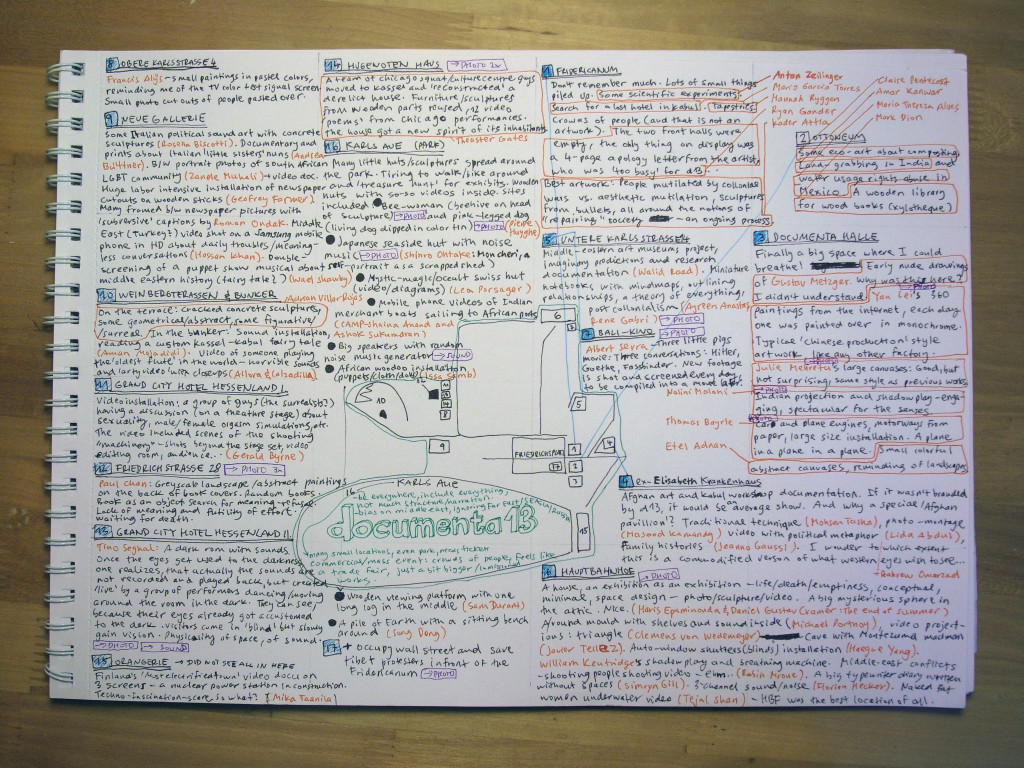 Documenta is one of the largest art shows in the world, and takes place every five years. I ventured to Kassel to get an impression myself. It was a crowded place, which impacted the possibility to enjoy some of the artworks, but at this size of an event, one has to live with this. Overall, I felt the distribution of works was quite unstructured and random, and I found the placement of artworks in a big park especially annoying, but in retrospective, the pieces start coming together now, so I see the lack of structure more positively now – everyone was allowed to create his own narrative.

I decided not to write about everything, but to point out three artworks which especially touched me. Furthermore, I decided to publish my travel notes which I wrote down during Documenta 13 – I compiled all of them on one A3 sheet of paper.

Of three artworks I found especially memorable, each of them was equally powerful in its own way: Kader Attia, Haris Epaminonda/Daniel Gustav Cramer, Tino Seghal.

Kader Attia – The Repair from Occident to Extra-Occidental Cultures.

Kader Attia’s installation was located in the Friedericanum building. It was a complex installation revolving around the theme of repair and reparation as a natural, self-initiating process. It investigated the period of colonial wars fought by European powers outside ofEurope. It consisted of a display of original objects created from bullet shells by soldiers during the wars or by the local population involuntarily involved in the war. It showed that even these remains of deadly actions can be re-used as a material for ‘reparing ‘ one’s soul or livelihood. (Some objects are symbolic – crosses, decorative objects, while other objects are more practical – water vessels, tools, etc.). Besides these objects, wooden sculptures of soldier’s faces disfigured during the war are shown. These are contrasted with marble sculptures of African tribesmen, who perform body modifications (extending lips or earlobes, cutting skin to create plastic patterns, etc.). In both, one can see the natural tendency of the body to heal itself. Archive photos of the soldiers, showing processes of healing are shown in a slideshow as well. The shelves with sculptures further contain books referring to the colonial past.

While the artwork deals with an almost hundred year old period in time, it cannot be more relevant today. On one hand, it can be seen as a reference to the never ending wars taking place around the world. On the other hand, it can be read as a much broader expression of processes of healing taking place in society, without any man-made intervention. In stressing this incredible self-healing power, the artwork is positive and gives hope, while at the same time it acknowledges the ongoing hardship. Moments of being hurt and recuperating do not only happen during war, but they happen on an every day basis to each of us. The wounds can be inflicted on the physical body, they can be inflicted on the mind, and they can be inflicted on society as a whole. The combination of showing both the horrors of being hurt and the process of recuperation makes this artwork very strong and unique.

Haris Epaminonda and Daniel Gustav Cramer – The End of Summer

These two artists created an installation which could as well be called an interactive spatial movie. A whole 4-storey house has been reconstructed, with new artificial walls and hallways, all in spotless white color, emphasizing the geometric layout and minute design. Epaminonda and Cramer placed objects in this space – ranging from books and sculpture to videos and photographs. I felt that the placement of the objects carried an equally significant meaning as the actual content of the object. Walking through the house felt like walking through different stage settings or scenes of a movie. The objects were minimal and placed scarcely, which added significance to each small gesture put in the space.

For me, the artwork referenced memories, as the videos shot on 8mm and black and white photos linked to the aesthetics of the 60s. The half empty rooms with half-hidden artworks (photo behind a plinth, ceramic vessel in an inaccessible recess), created a feeling of loss and nostalgia. Like when you are moving out of your flat, you turn around for the last time, and see small reminders of your presence that were left behind. At the same time, one could invoke the psychoanalysts to help and talk about the fears and desires of the unconsciousness that are being touched.

I wonder if this artwork is generation-specific. The set of imagery used refers to the past and evokes a certain period in time, which the gallery visitors strongly relate to. (Their youth or their parents’ youth). Maybe the reading of this artwork will be different in 100 years? However the feelings of slowly disappearing memories and loss will always be the same.

The strength of this artwork is in addressing universal human feelings, which it manages to ‘spatialize’ into an experience, that can be lived through by the visitor, without needing to literally understand each of the details and references that are present.

This work directly engages the viewer’s senses. You enter a dark room, you don’t see anything. But you hear sounds – someone is singing/beatboxing. You walk slowly, but anyway bump into someone else who is in the room too. You can feel there are people moving around you, but you cannot see them. You find a place to stand still, and listen to the sound. You realize that the sound sources are moving. And then you realize that these are not pre-recoded surround sounds. There is a group of performers that are singing and dancing in the room where you are standing! Slowly, your eyes get used to the very scarce light in the room – this takes minutes. Slowly, you start to see the dancers around you. The dancers can see you, because they have been in the dark room for a much longer time already, but you only slowly recognize the persons and movements. Only now you realize you are in the middle of a live performance, where there is no spatial distinction between the stage and the audience.

The slow realization that you are surrounded by something else than you thought is very intense. You realize how your eyes work, and how your ears work, you realize the power of these organs, but also their limitation. At the same time, this experience impacts you physically – once you know that there are dancers in the room, you start to behave differently, e.g. you want to go out of the way and stand at the side of the room. As long as you did not know there were people in the room, you were heading towards the centre of the room, as you would do in a gallery space, in order to keep equal distance from the speakers and images on the walls.

In short, this work cannot be described in full but has to be experienced. I hope that by describing the artwork, I did not take some joy away from those who may still be heading toKassel, however, I believe even if you know what it is about, it will still give you a very strong impression.

← Morgan Fisher “The Frame and Beyond”
“Mutadis Mutandis” at Secession →