Sheela Gowda is a well-established artist from India, who participated in major biennials and exhibitions. The exhibition is only titled only by the artist’s name and it surveys a rather broad range of works and topics, while still staying focused on the life and work experience of the artist. 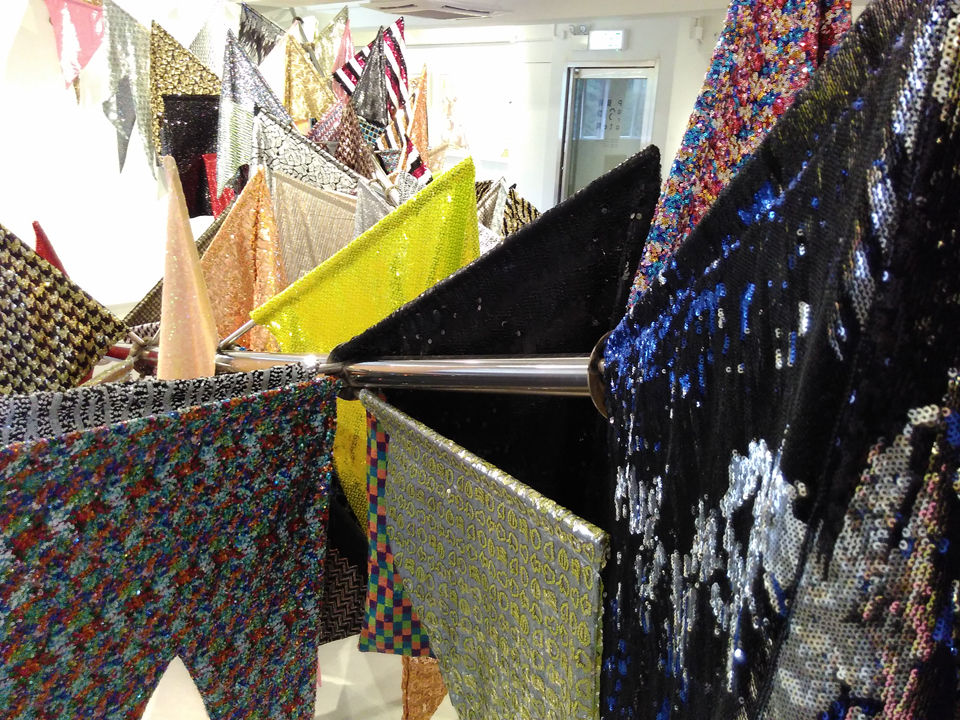 The artworks on show ranged from photo series to woven tapestries and stacked cow dung pellets. I found it very balanced and it managed to show the range of work Gowda has been involved with, while at the same time very much catering to all the audience expectations. This is probably both the merit of the artists and well as the curator – putting together a show which is very sensible both of the artist, as well as of the environment.

There have been works addressing directly the daily life grounded in materiality experienced by the artist. These works were more ‘simple’, yet by far not simplistic:

I am thinking of works like the framed cloth cutting outlines drawn onto a daily newspaper: In itself a daily found object collected by the artist, which however gets a sociopolitical dimension through its placement in a new context. The newspaper, supposed to transmit information (and create a community of readers, a feeling of belonging maybe) finds its best use as a material for livelihood in addition to its abstract existence as information. 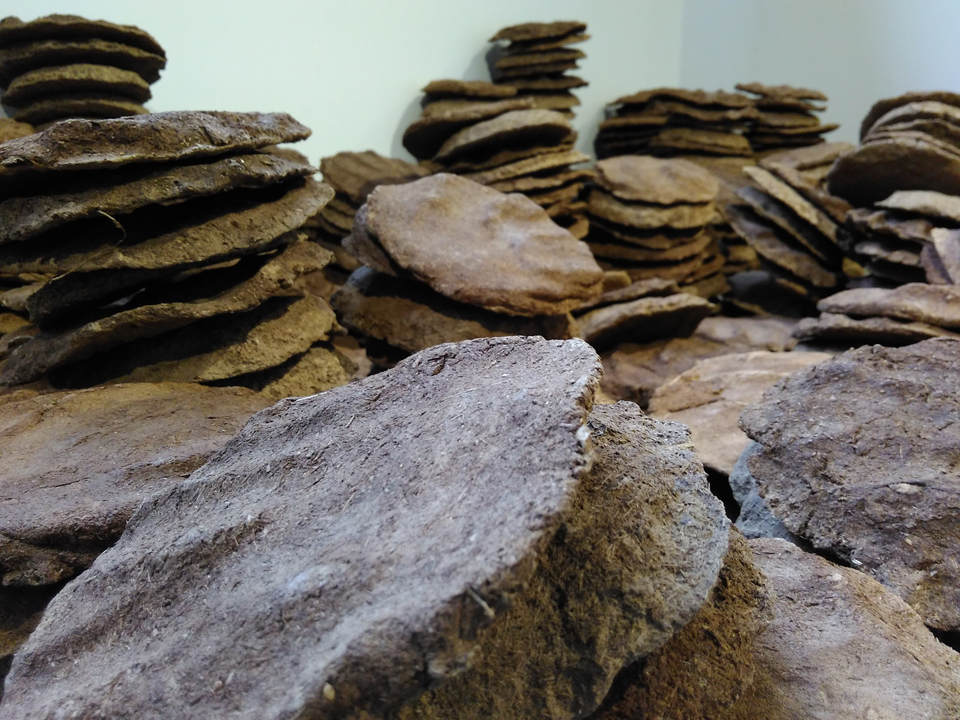 Another work referring the everydayness of India would be the cow dung pellets that look like oversized chocolate cookies stacked on the floor. I can sense it has a story, even though I cannot verbalize it, and I can imagine its mundane existence, the displacement, and the re-contextualization – a mixture of romantic exotic imagination about rural India and social-critical reflection on the changes (or non-changes) happening as time goes by.

If all the works went on in this line, one could easily slip into romantic fantasizing about a pre-modern ‘aboriginal’ India. However, this is not what happened in the exhibition. The material-earthly references have been complemented by conceptual-modernist references, which were directed more towards the art-history educated visitors, providing multidimensionality and cross-references. These works were also referencing the cultural-educational background of Gowda, where I imagine the intellectual struggles between imported aesthetics and the traditional culture. 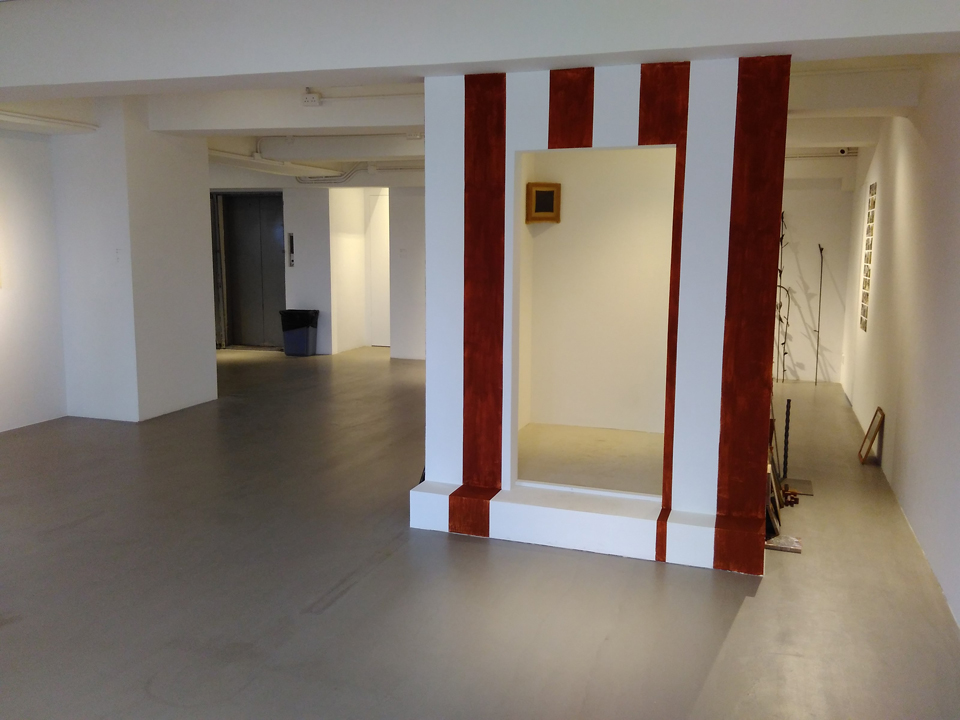 All this sounds a bit stereotypical, and when I first saw the ‘modernist shrine’ (don’t remember the exact title) I was a bit suspicious: A small room built in the middle of the gallery, with a copy of Malevich’s black square on rubber with ink hanging in one corner. On the outer walls of the rooms, more modernist ‘icon’ reproductions have been ‘deposed’. Without getting the references to Malevich, Fontana, Loos, Tatlin etc. the work would be quite meaningless, but with them, it provided this other dimension to the exhibition as well as a comment on life in a postcolonial world. All the icons seemed to be somehow deposed of, except for the black square which was still being looked up to. I related this to a search for identity, where one cannot ignore modernism, because of one’s education and environment, but at the same time feels very ambiguous about it as a ‘foreign element’. Then the discussion about multiple modernism etc. comes in, and the work blooms into a whole array of meanings. 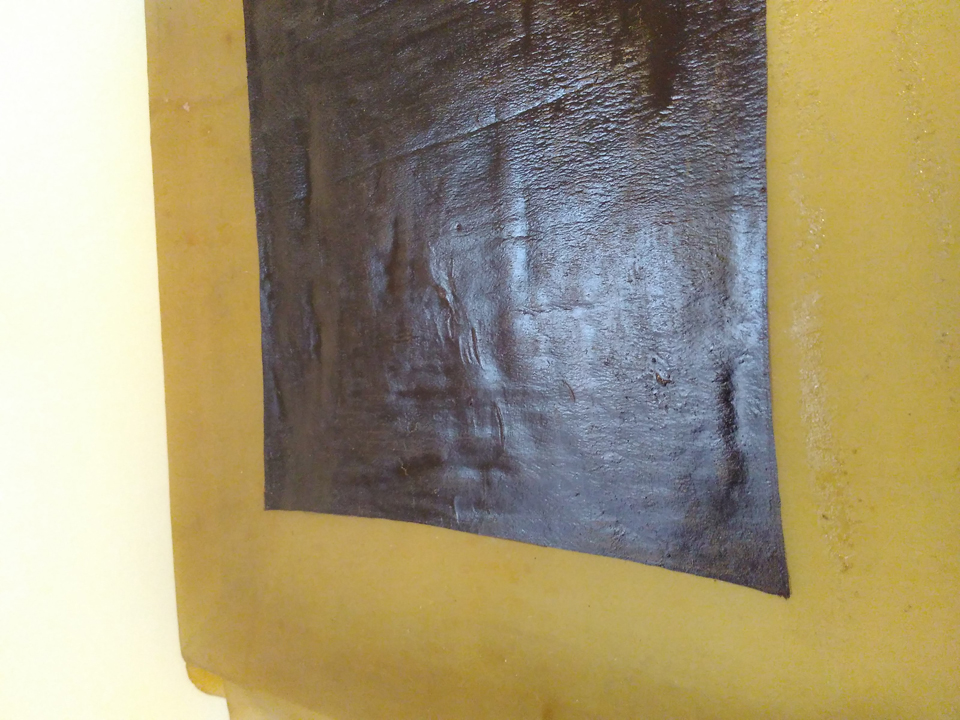 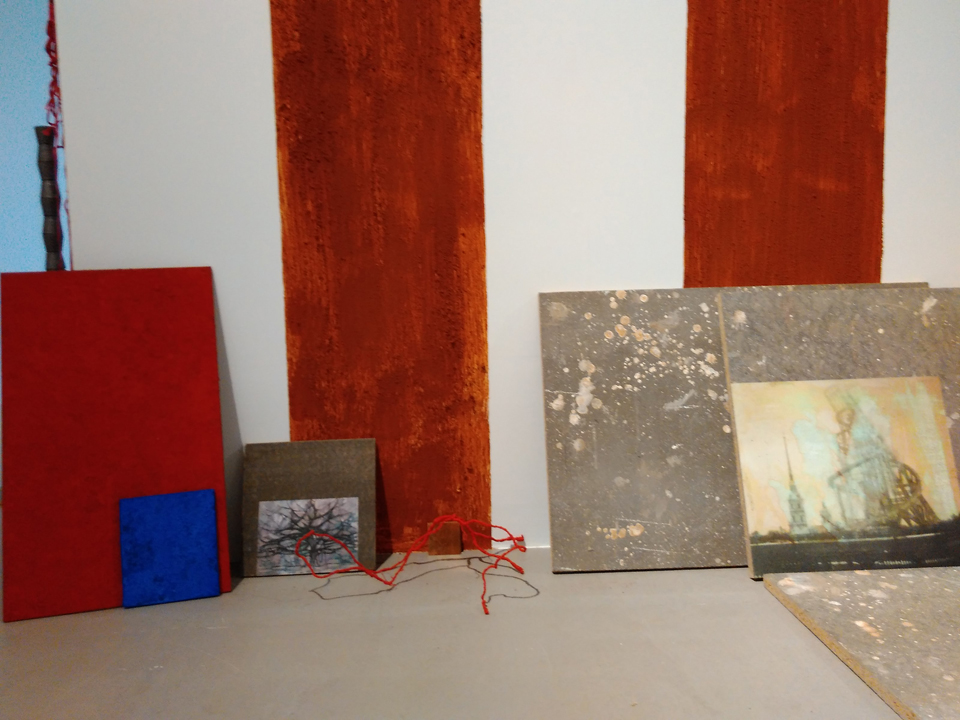 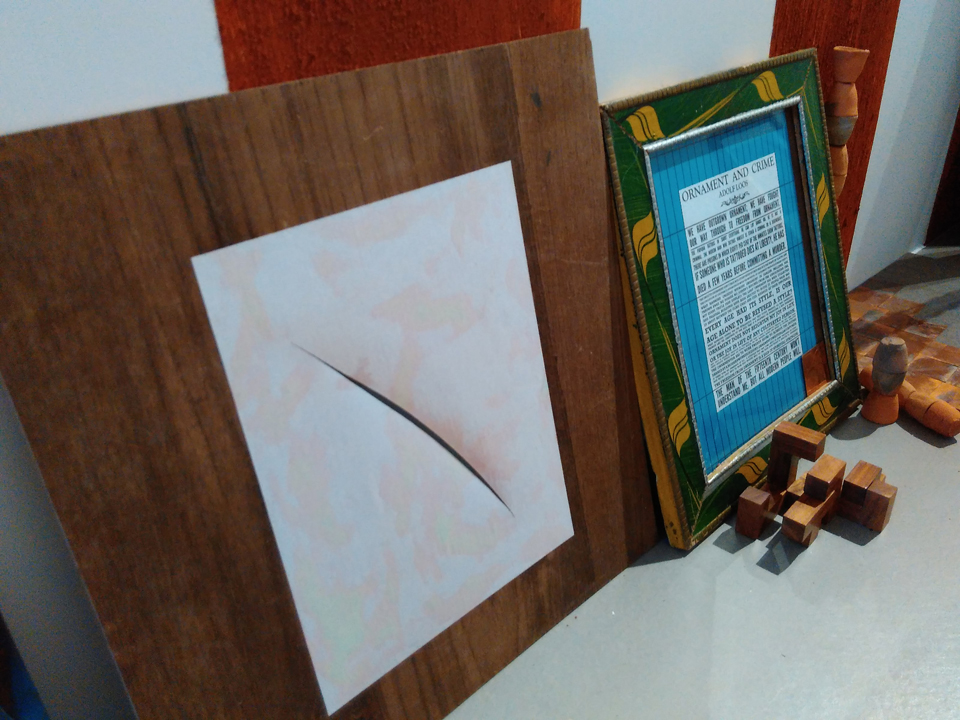 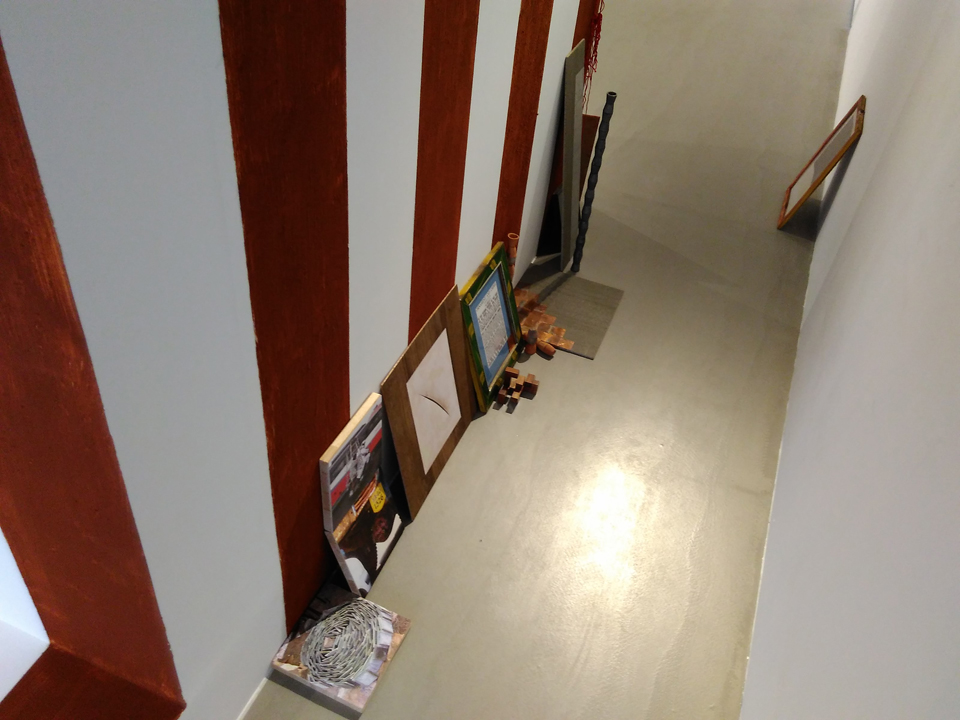 A similar ambiguous referencing is taking place in the photographic works and prints that are part of the exhibition. I assume many of them are found images. They provide yet again a contrast to the cow dung piles nearby. They complement the aforementioned tailor’s drawings on newspaper – here the material is the information, and not the paper. They tell stories, but of a different kind. Stories, which rely as much on the reality being referenced as on artistic practice introduced by western modernism, here refitted to suit the needs of another cultural circuit. 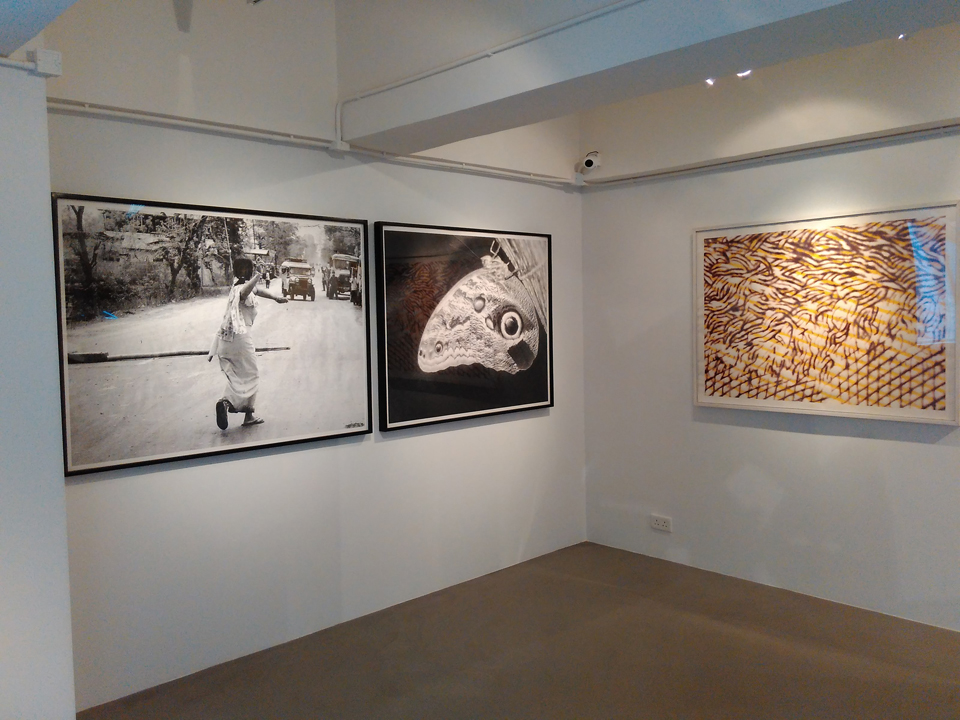 It is impossible to discuss all the artworks, so let’s just mention the last and most monumental one, a quite large sculpture consisting of steel poles and flag-like drapes hung around it. The steel is shiny and smooth, looks as if it just arrived from the factory. The drapes are shiny and glittery, like a stereotypical East Asian fabric market. Together, I read it as a kind of contemporary fusion of cultures and artistic practices: The realization of the modernist visions about scientific and social progress, materialized in the ease with which the steel frame has been sourced and constructed, decorated with the ‘exotic’ beaded colorful cloth pieces, which everyone is fascinated about, but only someone dares to wear. This multicultural colorfulness is supported by the modern age steel, which provides the shape, but at the same time masks and obscures it. 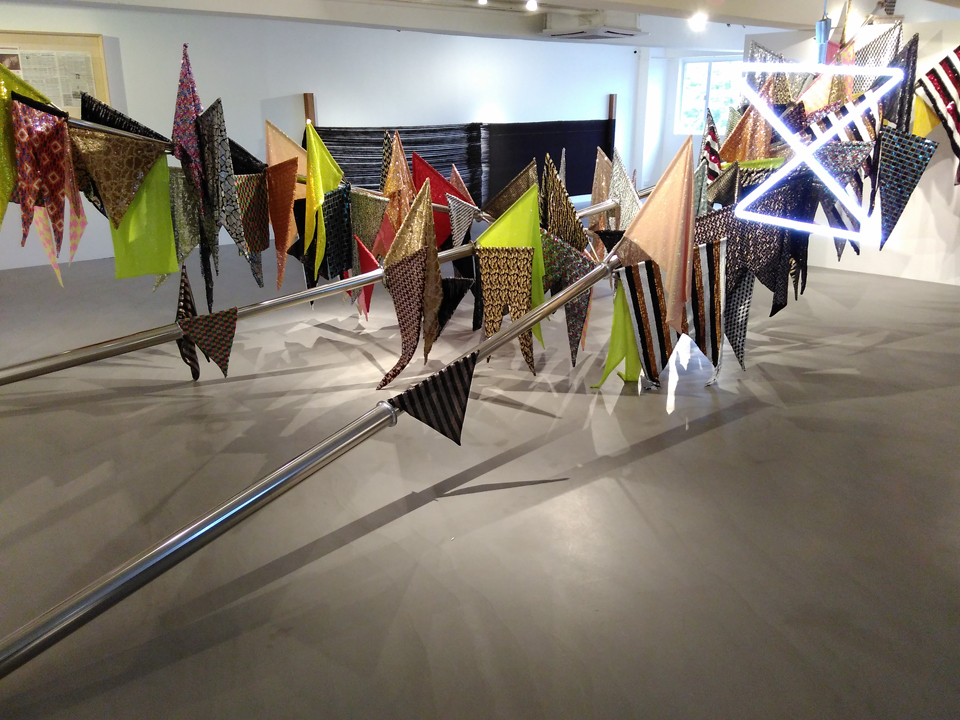 I am tempted to say that this exhibition is so rich in stories that engage, that is almost seems suspicious. Is it too audience friendly? Or has it just been a perfect match with my knowledge background? While I did not know anything about Sheela Gowda before entering, after leaving, I feel that I have a picture about what she does and what she is concerned about, but also about a much wider array of topics and issues which Gowda touched on and was able to pass on to the audience.

While the previous inaugural show at the new Para Site space gave me mixed feelings in regard to the installation, this time the hesitations seem to have been come over and the installation was very fitting to the space. The artwork sizes were balanced, and the large sculptural object in the center of the space was very fitting. Having a solo show also probably helped and made the installation more focused on the spatial arrangement with the artist probably having her say too. It would be great to see such shows in the Hong Kong Museum of Art, but while waiting for that, I can only say it is great that there are such shows at Para Site. 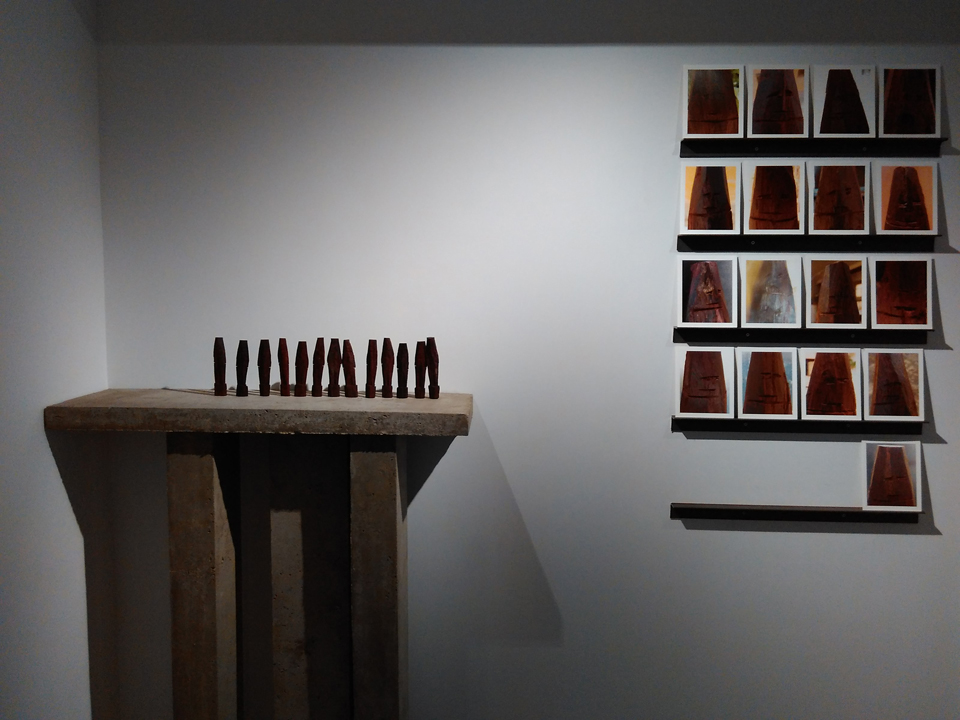 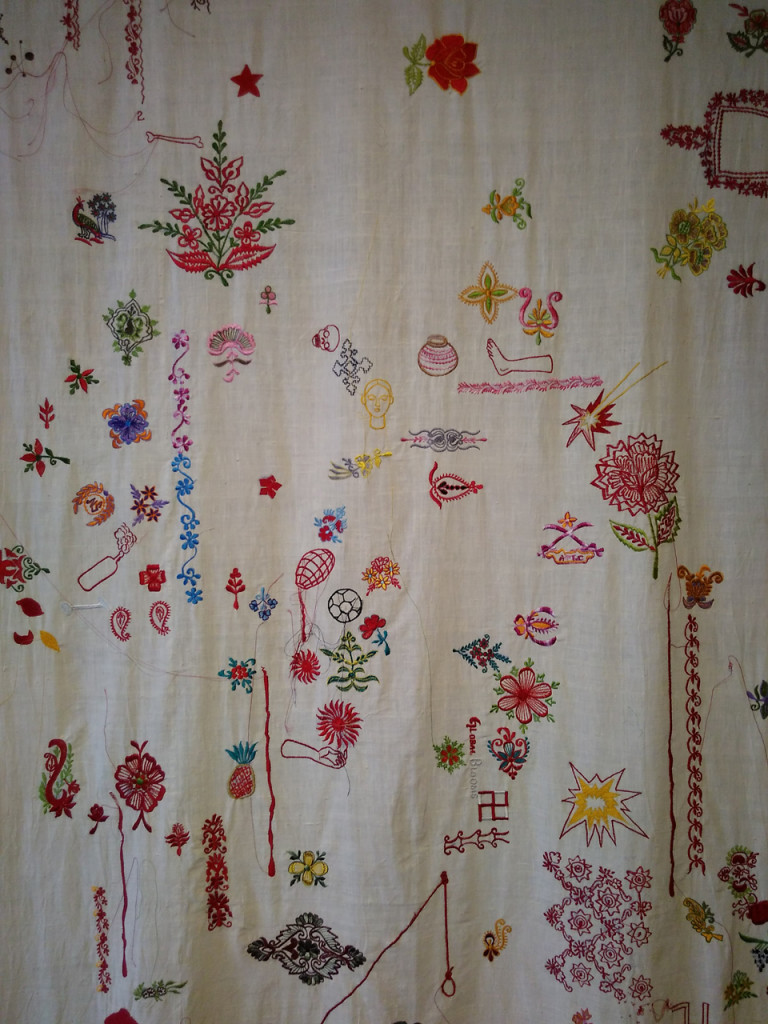 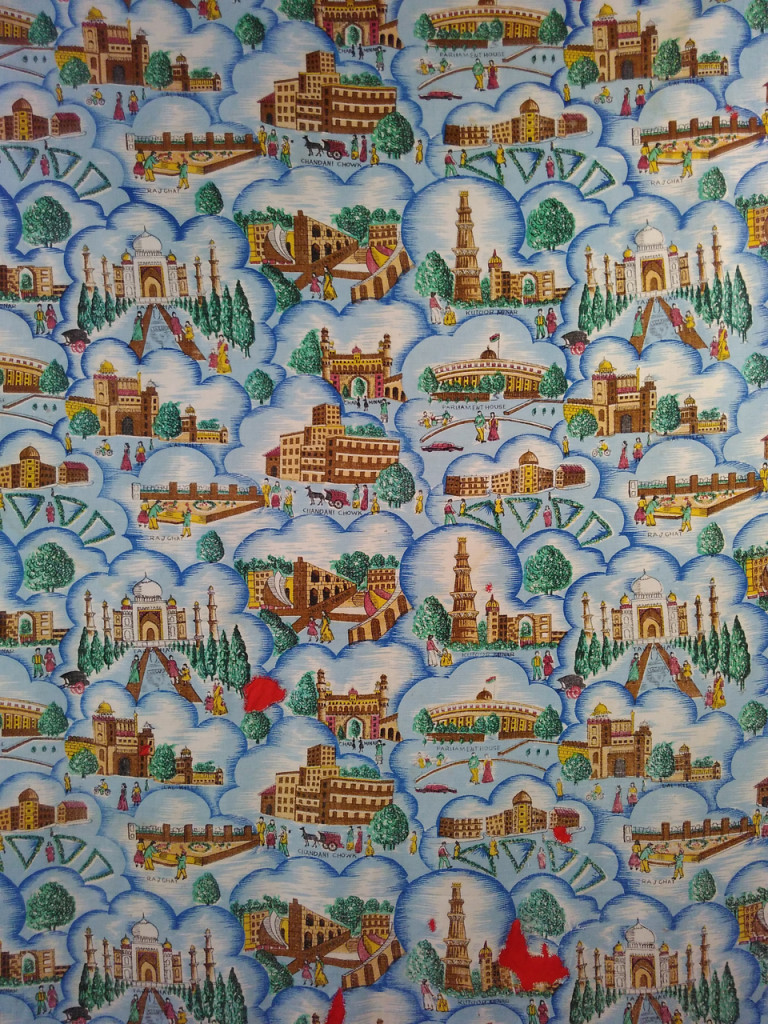