According to the leaflet the exhibition was trying to convey something of the young generation’s experience through their own (artistic) eyes – the ubiquity of information, the mixing of the real and virtual, etc. 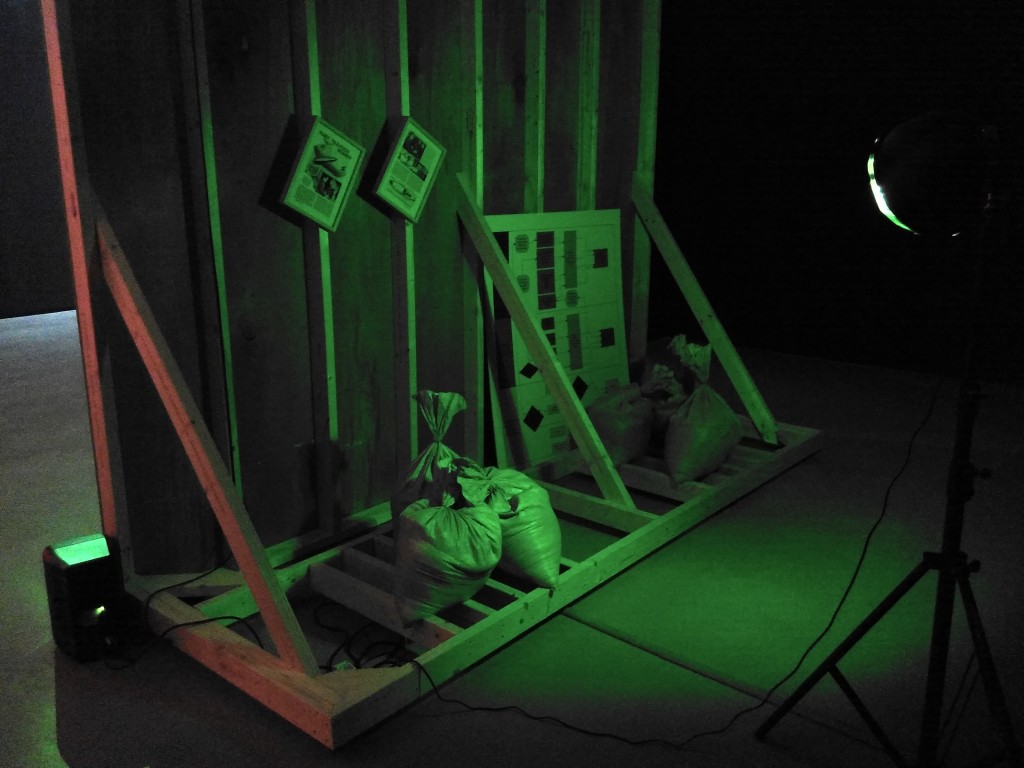 On the first floor one was welcome by Park Minha’s (박민하) dual projection of U.S. soldiers training for a Middle East mission in what appears to be derelict movie sets, the movie screen tinted in red and green both from the front, where the video was playing and from the back where the frame was exposed and decorated with some pinned up posters and articles related to the topic. Park had another artwork nearby, another two channel video work, also featuring found footage, this time related to the ‘history’ of television. 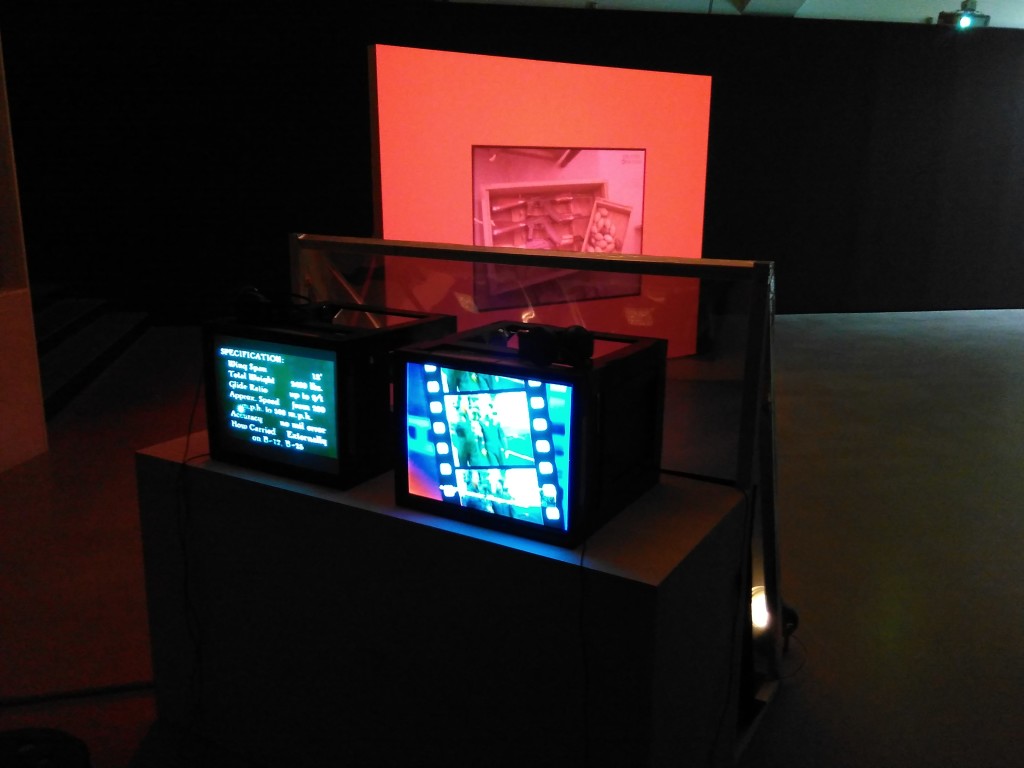 Further down the room was Kim Heecheon’s (김희천) single channel projection, a black and white HD movie containing shots from everyday life, with some AR elements inserted. The film was dubbed in Spanish with Korean subtitles – “to generate an adequate distance” the leaflet explained – which in my case was an infinite distance. 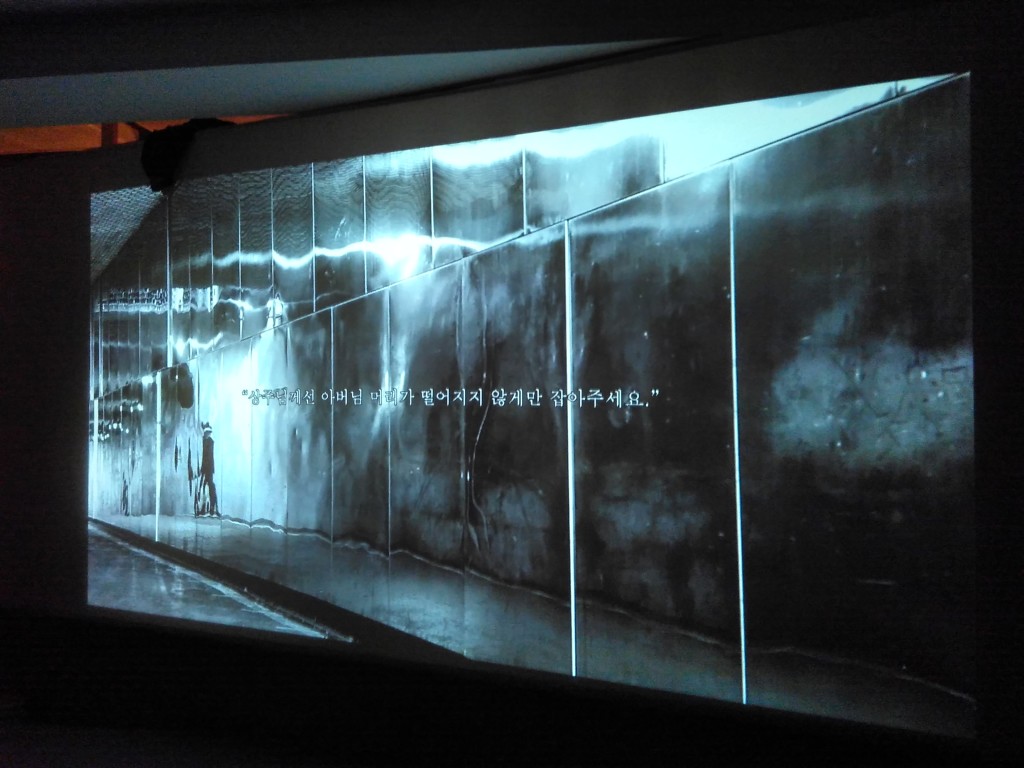 While watching Kim Heecheon’s artwork, the audience was sitting on another artwork, a wooden spectator stand by Kim Donghee (김동희). Here the main concern seem to be the production of space in an exhibition, other of his/her work seem to touch on issues of production of space as well.

In the very corner of the space, inside of a black box which one enters through a black door (thus easily overlookable) was another rather hot little screening room, which seemed to be still part of Kim Donghee’s architectural intervention and showing another Kim Heecheon movie.

While the first floor was all dark, the second floor was brighter. The first thing one saw were some pencil drawings on paper – abstract, with a lot of circles. Even after reading the English description in the leaflet twice (something about lights and noises in urban space), and observing the work, I did not get the meaning. But generally speaking, it was nice to see some non-media work in the exhibition. There were also two large scale drawings, one on carbon paper – a square in the middle of it – which may have to do something with the other drawings on the wall given the corresponding size – and one very large drawing of the Moon on white paper, rather nicely done and somehow feeling out of place between the other media-works. So while it remained mysterious, I somehow appreciated this work (by Kang Dong Ju 강동주). 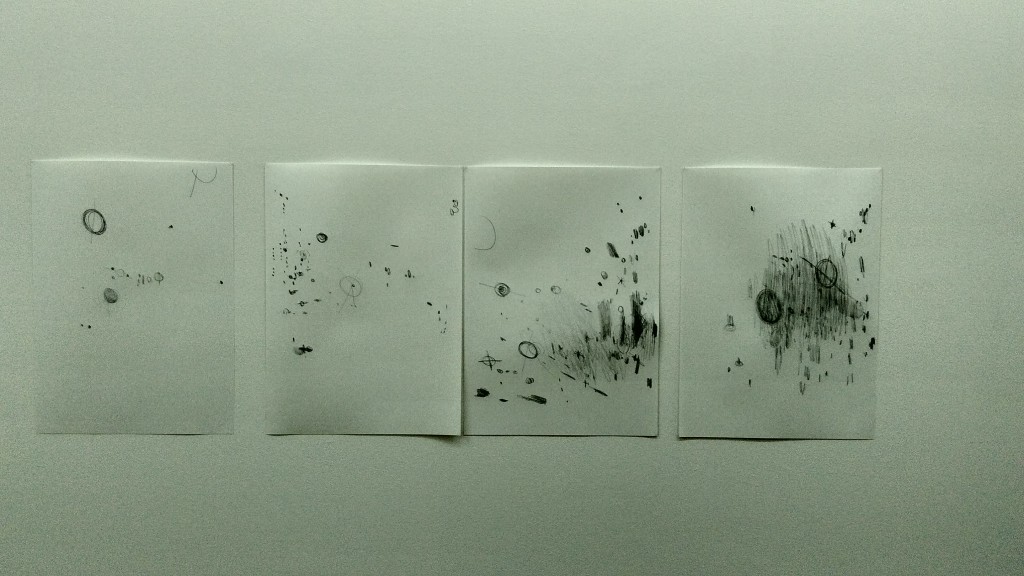 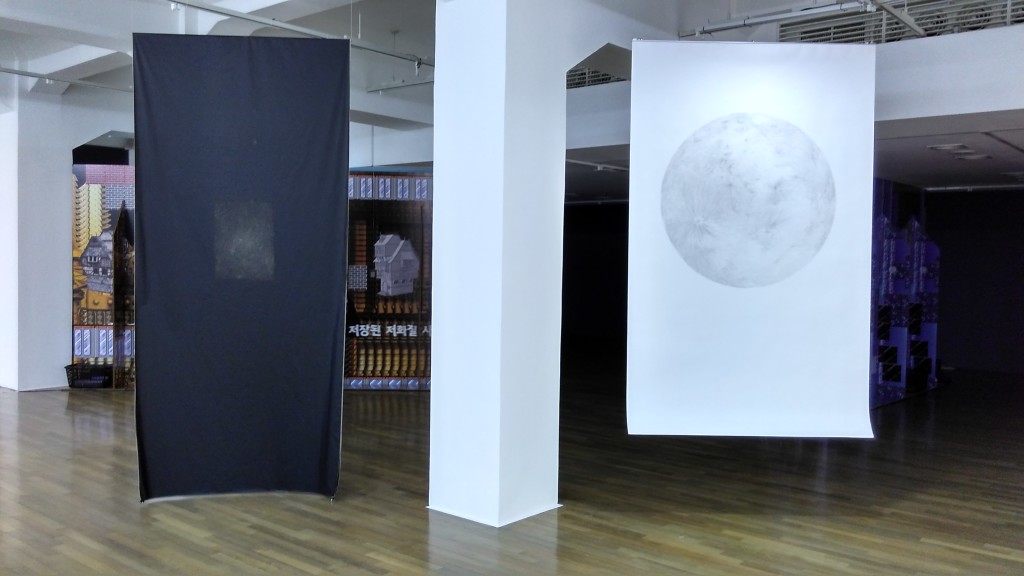 Next there was Kang Jungsuck (강정석) with two projections out of which only one worked. Similarly to Park Minha below, he made use both of the front (the projection surface) and the back (the supporting structure). On the one projection which was running, shot in the Seoul Metro, one could see different people (or same person on different occasions?) saying goodbye to the camera (probably held by the artist) and exiting the Metro. The backside of the projection screens has been covered by a wallpaper reminiscent of pixilated videogame graphics and there was a take-away booklet in psychedelic colors full of Korean text with a Photoshop emboss effect applied. (The leaflet explains the video “portrays the process of bidding farewell to his friend who works as a designer at a game company.”) 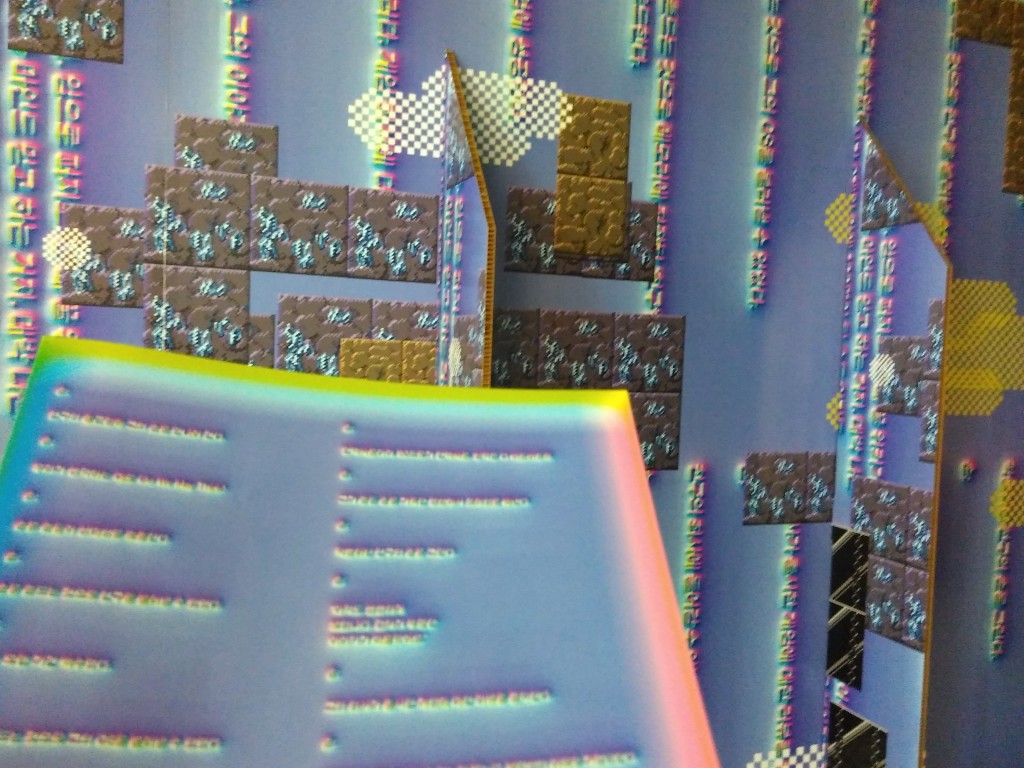 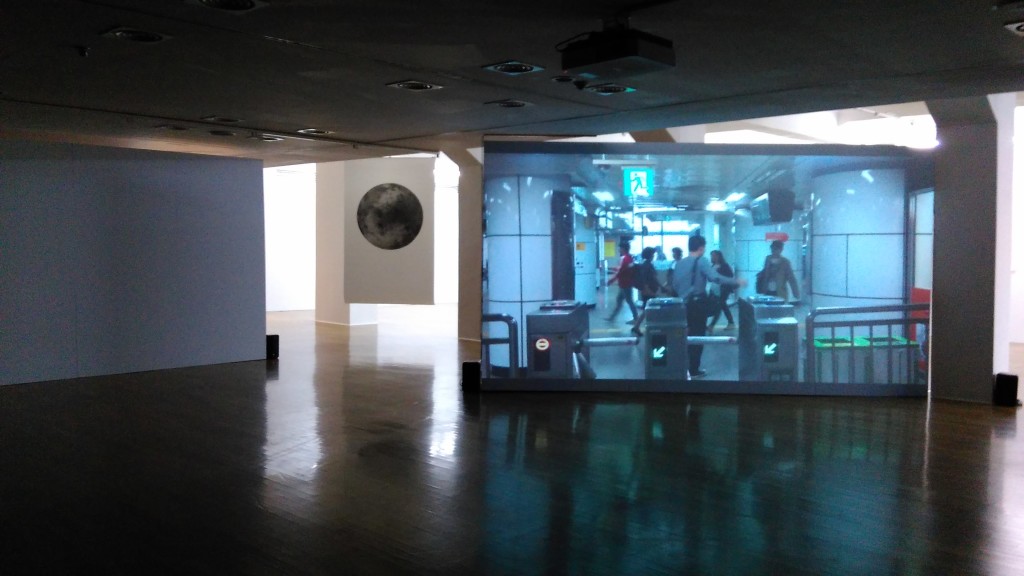 Lastly, the exhibition features an installation/presentation of a board game (which is also an artwork, the leaflet explains) by artist/board game designer Kim Yeong-Su (김영수).  The game was in Korean, so I was out. 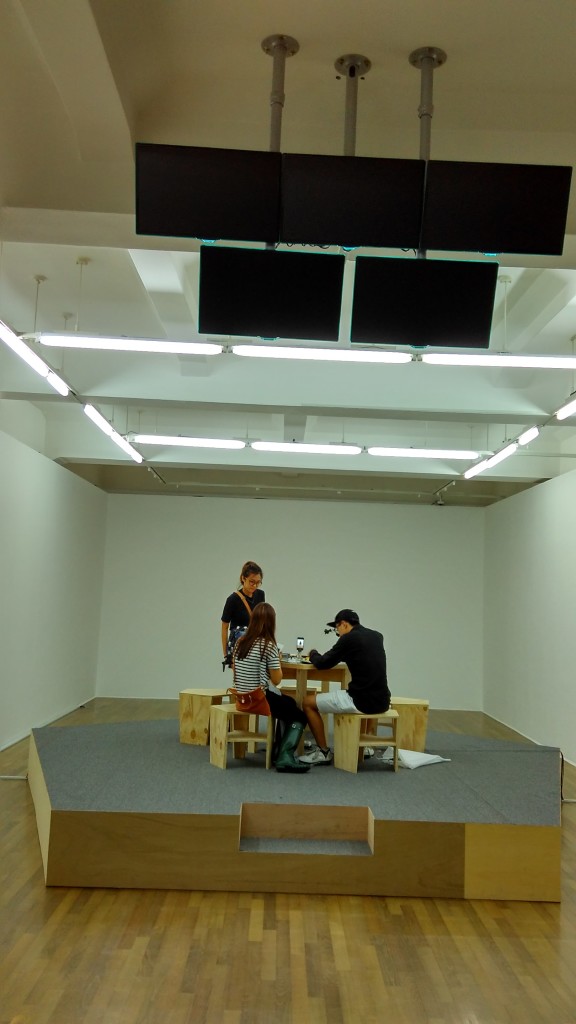 Overall, I think the exhibition did manage to touch on the Generation Y topics. Something about mixing the real and the virtual, recording for the sake of recording, game-life overlapping. I could not much fit in Park Minha’s work into this context, as it looked more like some Harun Farocki-style work, concerned with the media transmission mechanisms and taking a critical standpoint on that. On the second floor, I was intrigued by Kang Dongju’s work, but did not manage to make a conclusion as to how it relates to the exhibition. It was not an easy show for ‘foreigners’ like me, but it did offer a peek into a few artist minds.