To celebrate the 70th Anniversary of the Liberation Day (of Korea – which was one country at that time – from Japanese occupation) SeMA prepared an exhibition looking northwards – the North Korea (NK) Project. Creating a North Korea related exhibition for the liberation anniversary showed the prevailing concerns and scars, and pointed towards an occupation with the present more than with the past. While the liberation has taken place and was accomplished, the following North-South division is a historical fact that remains frozen in time, and thus simultaneously past and present. 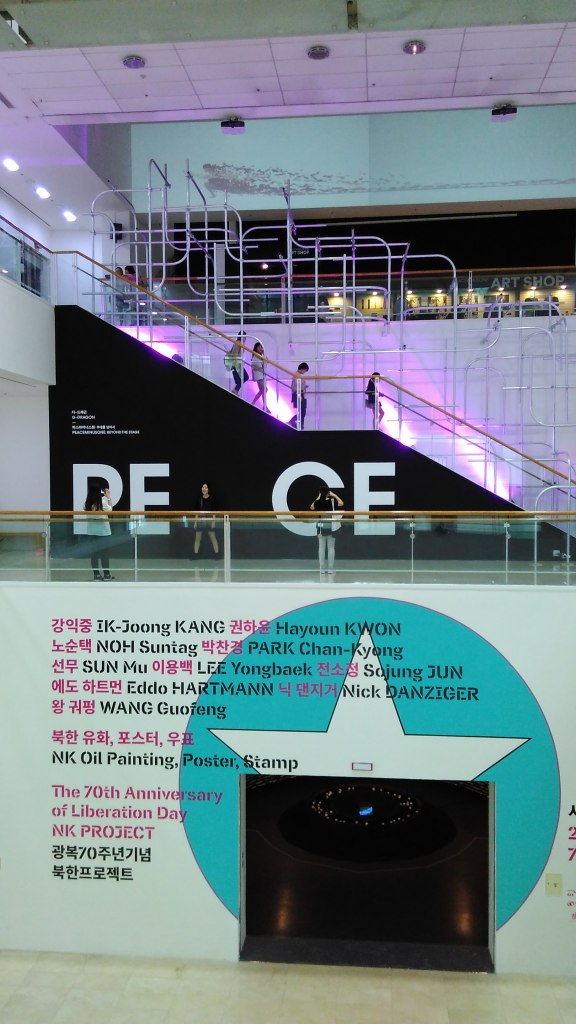 Entrance to SeMA exhibitions “Peaceminusone” on the top floors and “NK Project” in the ground floor.

While I have seen bits and pieces of North Korea and North Korean art, this was probably the most complete and balanced display of the topic I have seen so far. The exhibition approached the theme from three viewpoints: South Korean artists addressing the issue of two Koreas, artworks by North Korean artists (posters, paintings and stamps) completely ignoring any North-South problem, and artworks of documentary nature created by third parties (foreigners) in the North.

The biggest part of the space has been occupied by North Korean paintings and posters (both from foreign private collections – Ronald de Groen and Wim van der Bijl). As an East European who still experienced bits of late socialism, I could connect with these images, and it made me feel a bit of kinship with North Koreans, as I tried to infer the communication style citizens are surrounded by. A collection of stamps (Shin Donghyun collection) provided a brief history of important events from an official North Korean perspective – anniversaries and meetings of politicians, as well as celebrations of ordinary soldiers and workers bravery.

The other two sections (South Koreans and foreigners) were comparable in size and they were balancing each other out mutually. Overall the exhibition expressed a feeling of looking towards the North with curiosity rather than fear. It largely refrained from any depictions of military, DMZ, political figures, etc. and that was a very bold move. The ‘foreign view’ section had some works that depicted North Korean stereotypes, like the huge crowd photograph of Wang Guofeng, or the big empty spaces on Edo Hartmann’s photographs. These did not bring much new to the table. But Nick Danziger photograph’s made up for that with a very sensible and down to earth approach, trying to show North Koreans first and foremost as people, not at all different from South Koreans or anyone else. Simply as humans, living their lives.

Between the South Korean artists, my personal highlight were paintings of Sun Mu, a North Korean painter who fled from the North and settled in South Korea. These paintings served a bridge between the social realist style of the North Korean paintings and the conceptual works of South Korean artists. At first, I wasn’t sure whether the paintings belonged to the North or South, but that was the point: They occupied an ambiguous space in the middle, expressing both a longing for the other, as well as some very universal feelings, which – real or fake – not only echoed the dreams expressed in North Korean paintings, but were also shared by everyone no matter where they came from. Sojung Jun’s video work also focused on this tension between the one and the other, trying to show that it can be bridged, through expression and cooperation (in her video work’s case through music).

One artwork, a 3D movie by Hayoun Kwon, was so popular that people were queuing for it, as the number of 3D headsets was limited. Unfortunately I did not have the time to queue, but it makes me consider coming back, both to see it, as well as to take a second look at the artworks on display.

Overall the exhibition had a friendly and approachable feel, even though it was dealing with a complex topic. Most of the time, it managed to stay away from stereotypes. Some works were on the boundary towards that, and sometimes a certain amount of pathos seeped through, especially in the case of South Korean artists. But this cannot really be taken away, and rather than a weakness, I would attribute it to sincerity and honest expression of a personal viewpoint. The measures for judging North Korean art are obviously very different, and one cannot go about applying modernist or conceptual criteria. My limited knowledge makes it difficult to position the exhibited works within a larger context of North Korean art, but the amount and variety was large enough to give a feeling of being representative, at least of one segment of the production (the export-oriented segment). 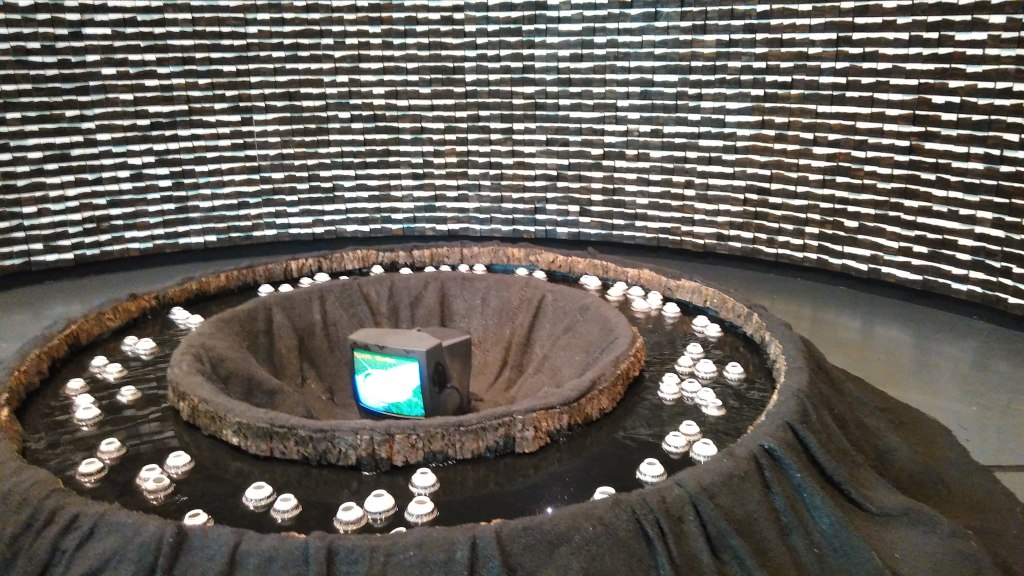 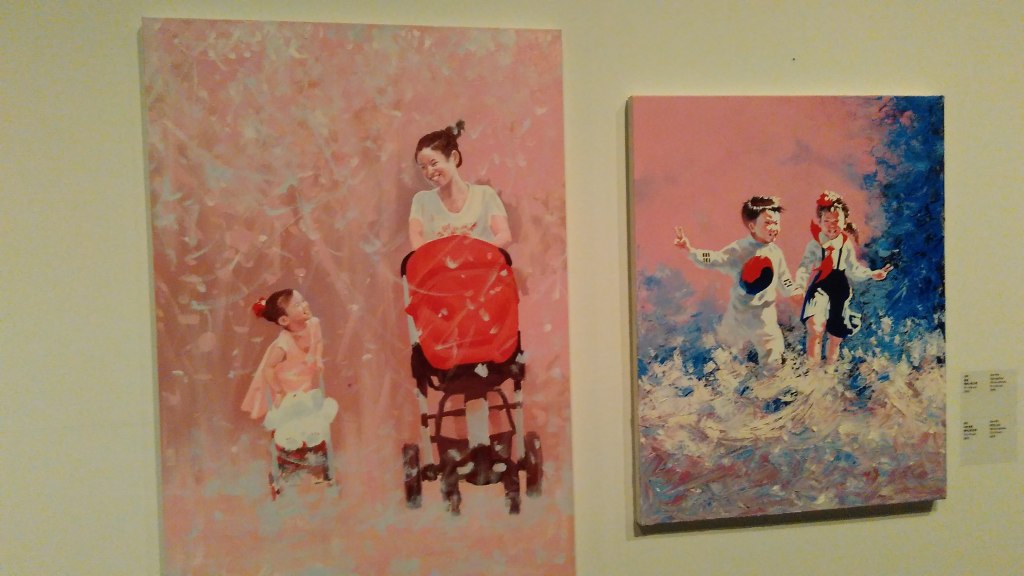 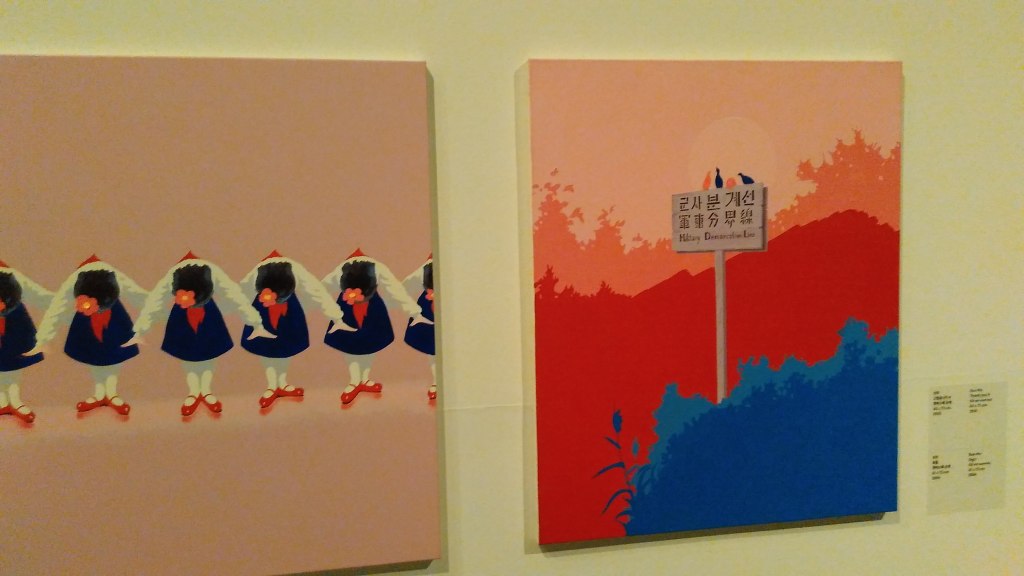 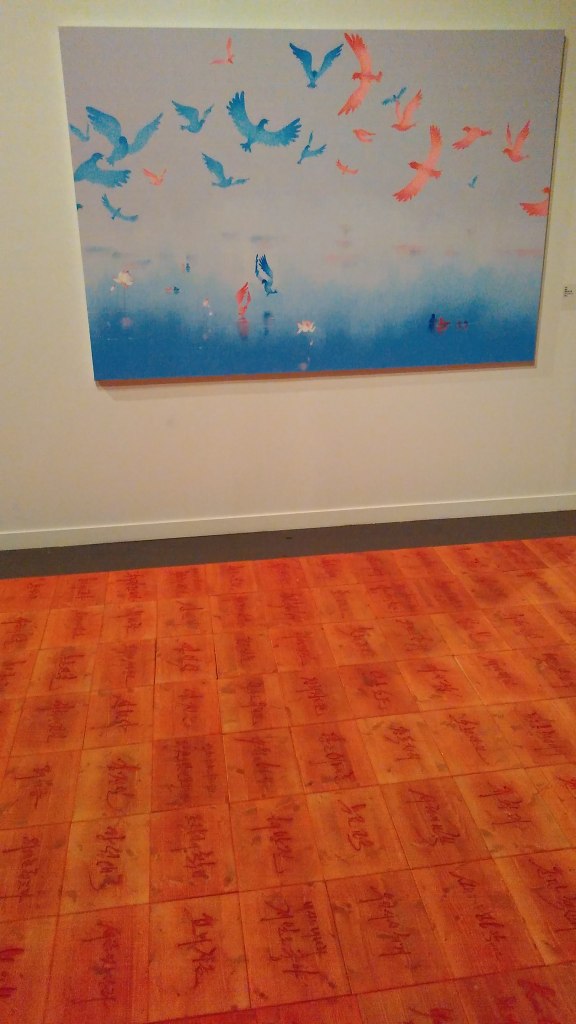 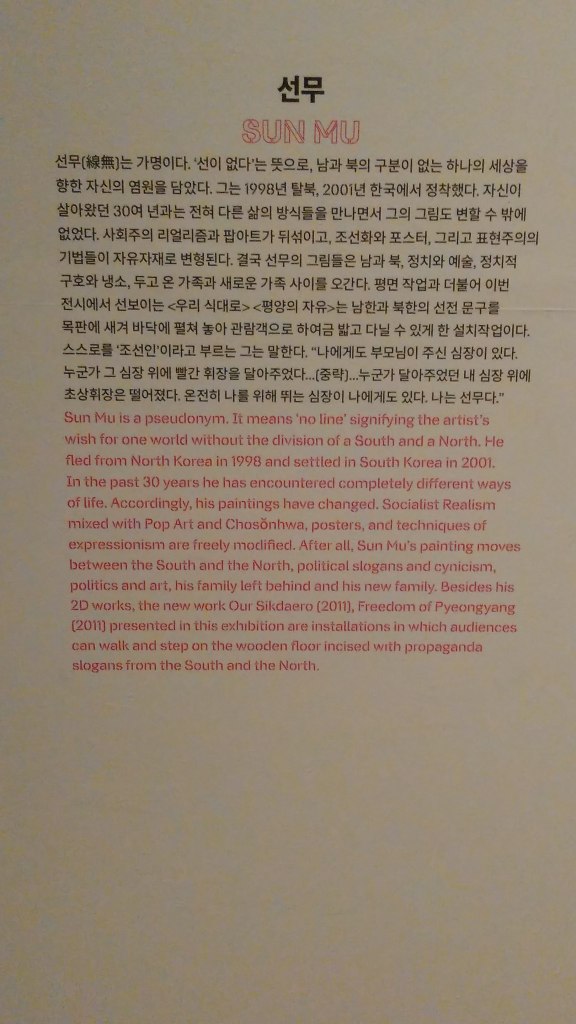 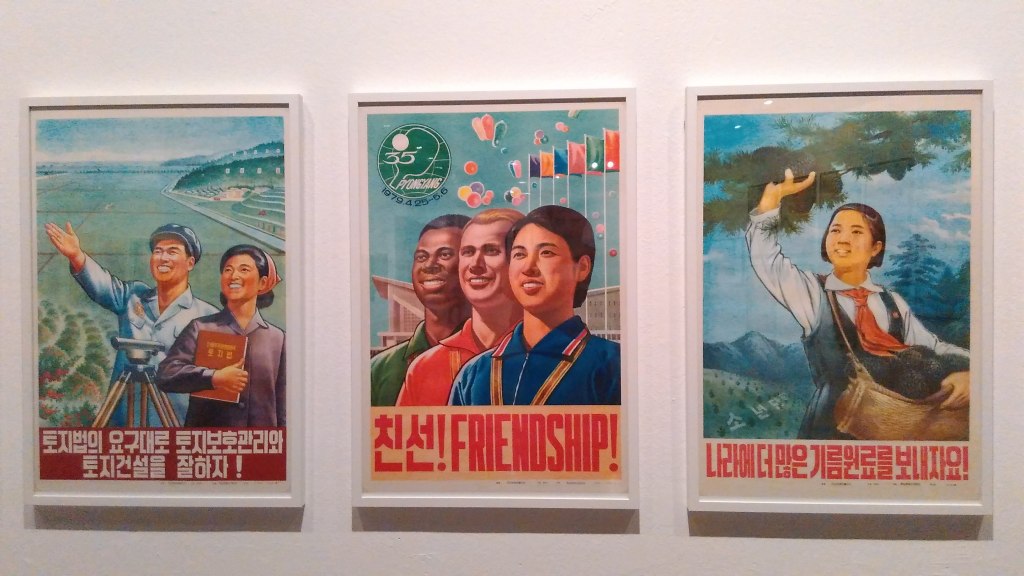 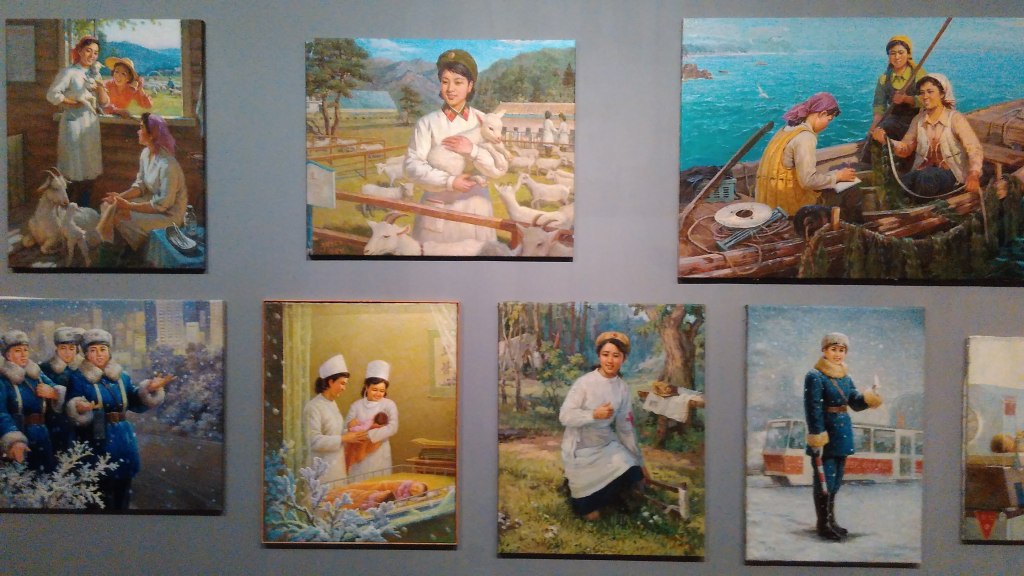 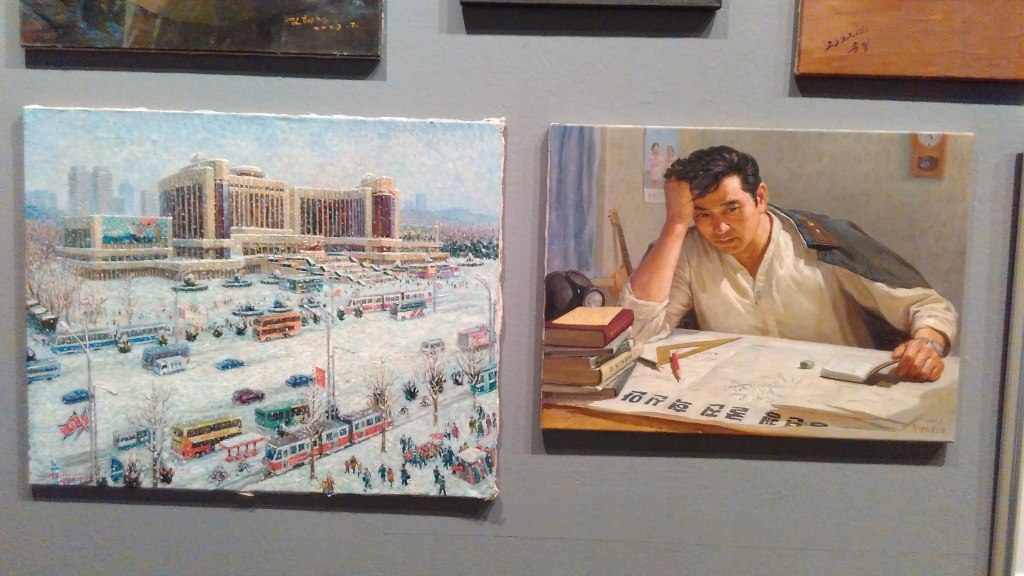 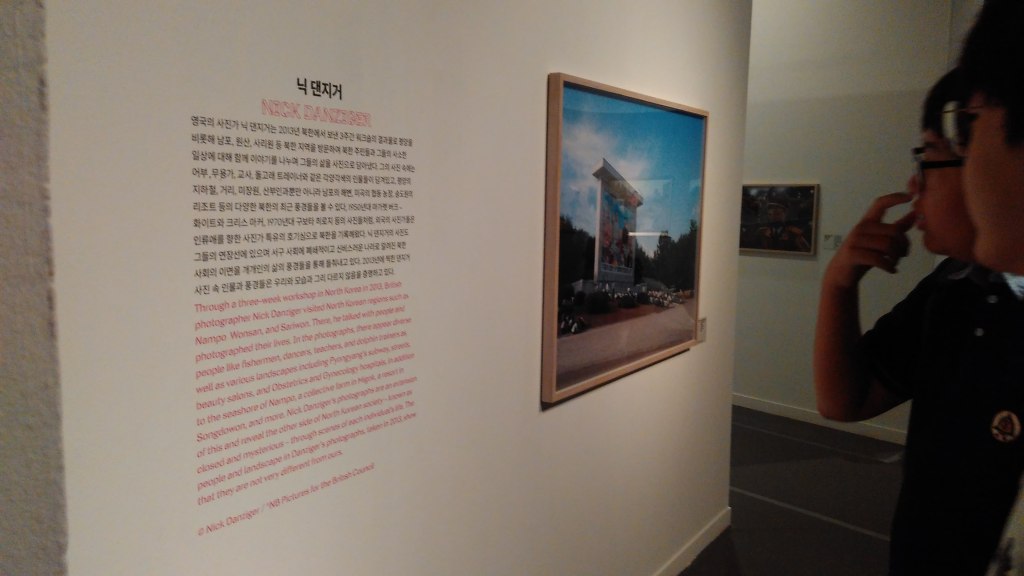 Nick Danziger (no photos allowed in that part of the exhibition) 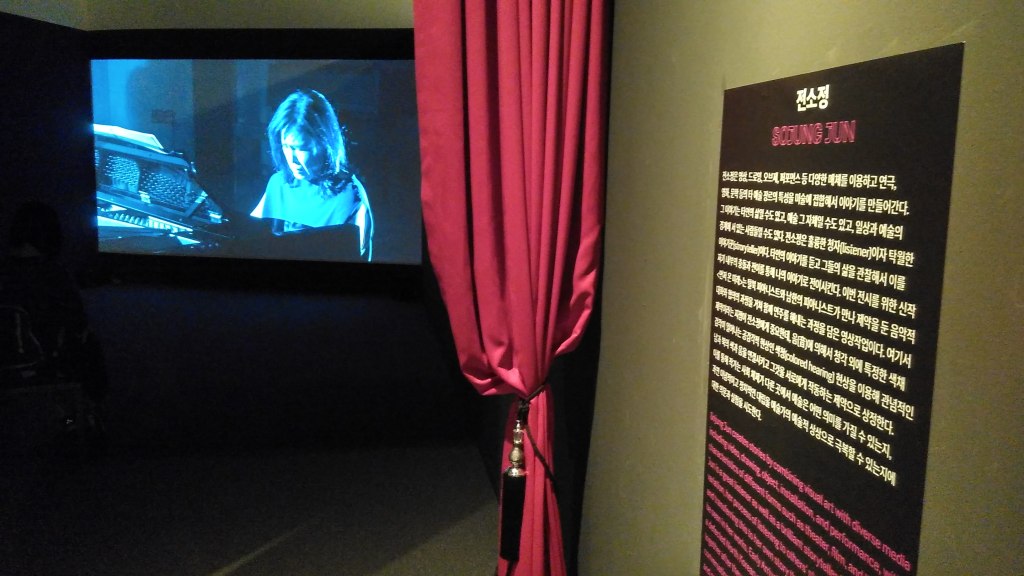 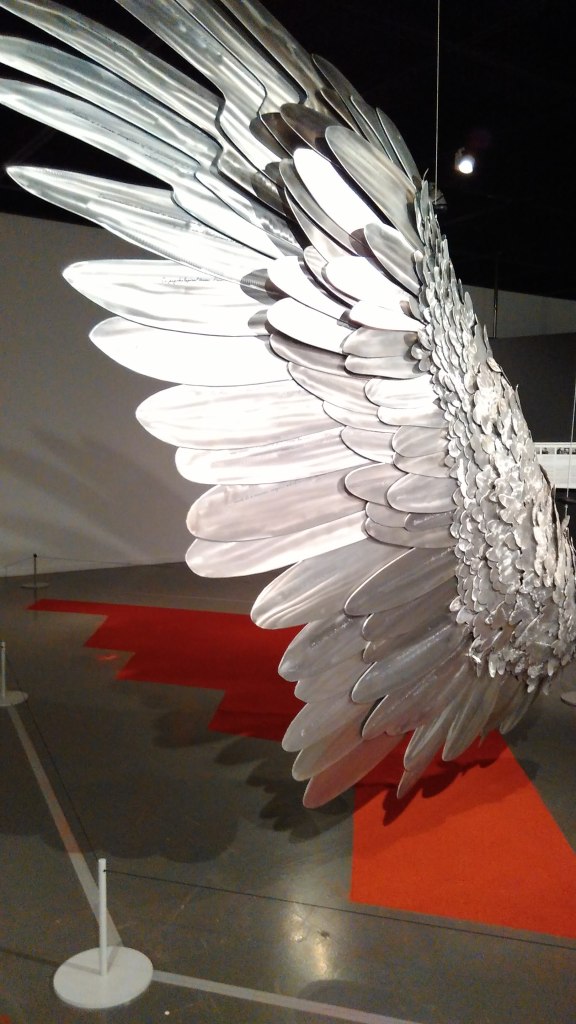 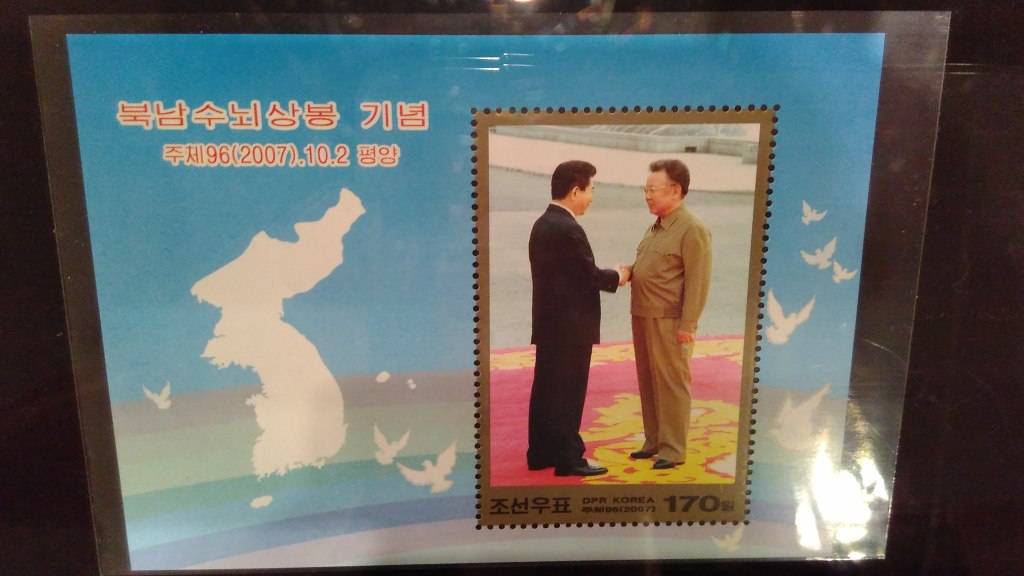 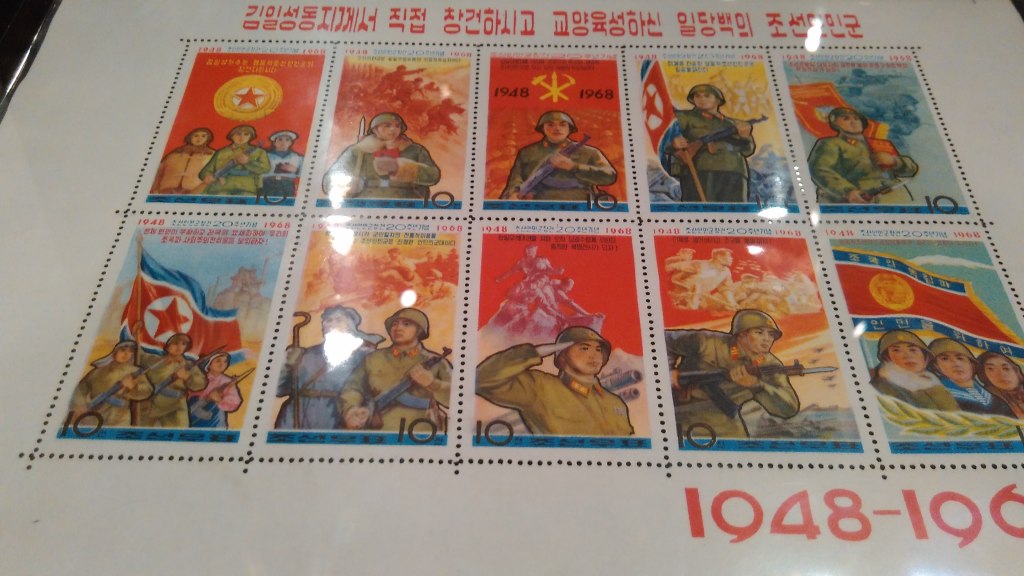 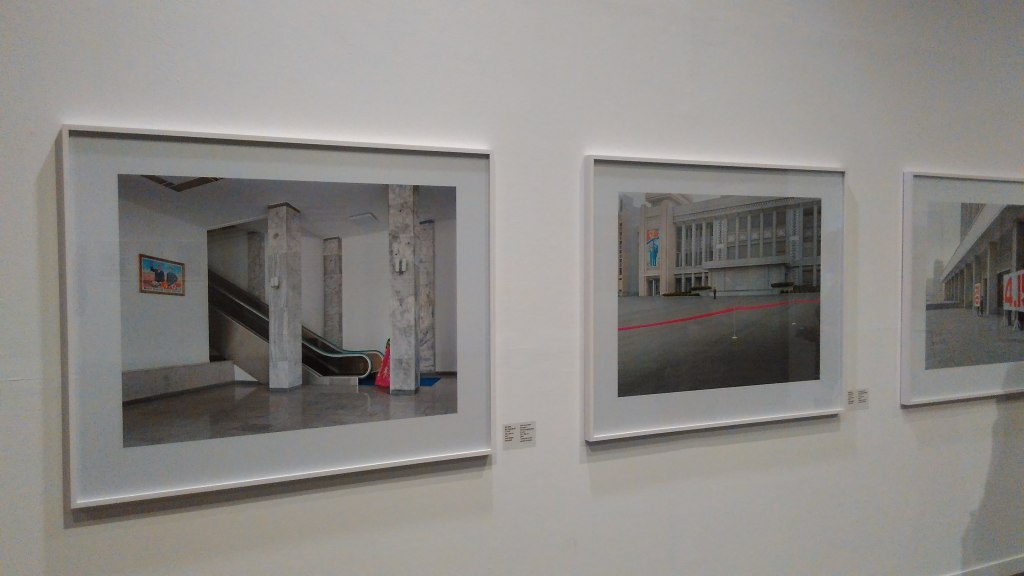