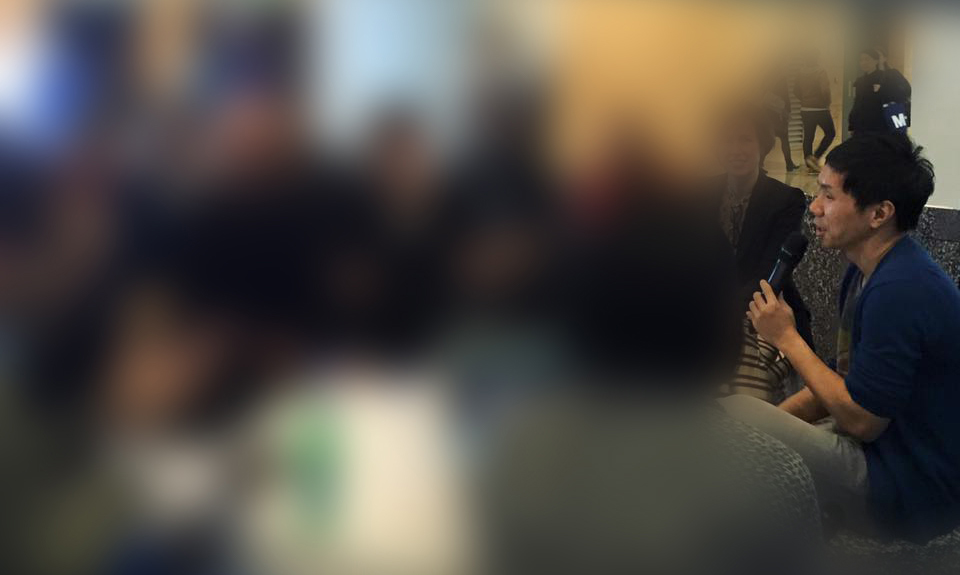 I just had a faint memory of Paul Chan from seeing his work at documenta 13 in Kassel: A room full of book covers that have been ripped apart from the content and painted over in monochome grey. The installation looked like a hanging of minimal paintings, yet it also did not, as the book covers still maintained their distinguishable properties like standardized proportions or the distinguishable thickness of the bookspine. This work seem to bridge Chans two practices that he discussed in the talk, without mentioning the work.

The discussion started off by presenting some of Chan’s artworks, a projection-less projection with power drawn from a shoe, and more recently textile sculptures animated by air being blown into them with large fans (these works were also available for purchase at the art fair next door). Chan explained his shortsightedness that lead him to create works that contain movement as the signature element, something discernable in the latest work, but something I could not much relate to the documenta work. He also mentioned the contradiction, that while he is interested in animation and movement, he detests screen based works.

Chan explained Immanuel Kant’s idea that a public can only be understood as such when it is a reading public. Without the commonality of a shared and read text, there can be no public, Chan said. For this reason, Chan understands his publishing practice as a form of public art, questioning the traditional idea that all public art has to take the form of large material heavy sculptures or murals.

Chan also brought up Theodor Adorno’s defense of unique objects, contrasted by the leftist obsession for mass produced objects (as can be sensed in Walter Benjamin). Unique objects are to be understood as competing claims for uniqueness, bringing about an ecology of differing opinions where the strongest and most valid claims survive.

This position is understandable from someone who as an artist sells unique objects and lives under the influence of U.S. ideology, however it somehow does not account for the fact that all of this “free market” competition happens with very unequal weights and starting points attached to these claims which to a big extent predestine their success.

It was good to hear Chan talk and reflect on what he said. Nice to hear his concluding remarks that he does not care about the audience at all when working on his artworks and enjoys wasting money and time while at the same time admitting that he started Badlands to counterweight the artmaking that did not prove to be fulfilling enough and made him crave for a regular daytime job that he created for himself with the publishing imprint.