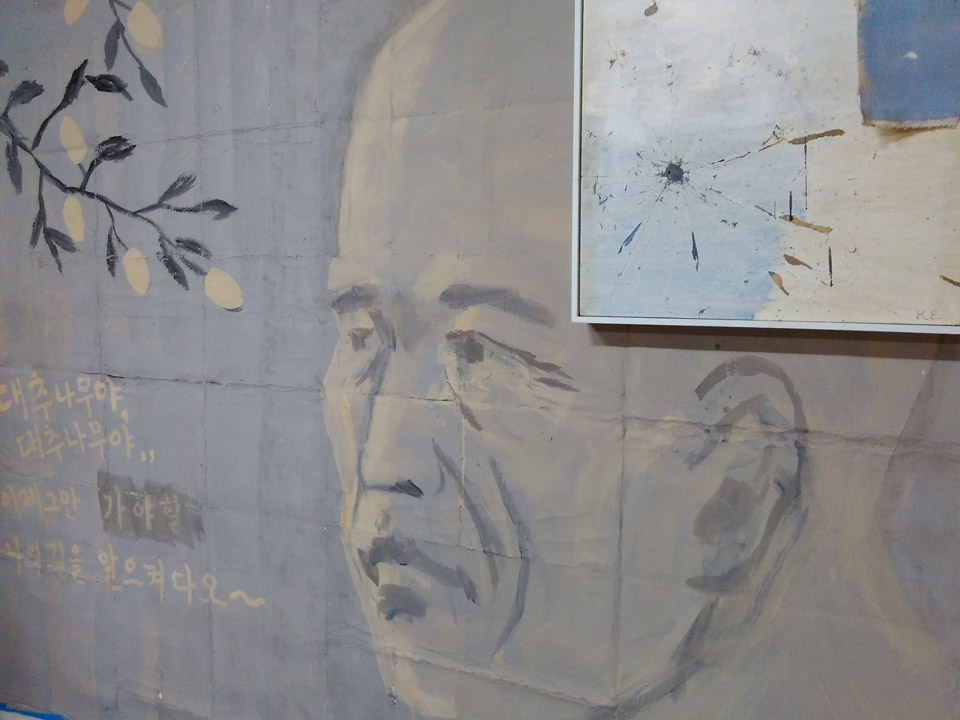 The autumn constellation of exhibitions at MMCA Seoul is rather pleasurable. There is the Korea Artist Prize, a yearly recurring show. The big central space has a new mega-installation. There is an exhibit addressing the architectural space of the MMCA Seoul building itself, and there is a quite unusual art and craft exhibition. Kim Sooja’s solo show is still there too.

First I ventured into the Korea Artist Prize 2016. Similar to last year, it was a carefully balanced out quartet of artists, each presenting a mini solo show. Compared to last year, it seemed to be less youthful. Maybe it was just an impression strengthened by the first exhibit of Kim Eull who is in his 60s now. He build a little studio-house inside of the exhibition space, but my main impression of him was that he is an artist who likes to collect old dolls and paint portraits of himself. Next was Back Seung Woo, with a highly conceptual and formalist approach to photography, as a result of which there was not much left to see: The images hanging on the walls were most of all signs for an abstract concept of “photography” and not really something to look at. Next was the artist duo mixrice (Cho Ji Eun, Yang Chul Mo) who dealt with sociopolitical topics like gentrification, urban renewal and immigration. They managed to transform this dirty topics into a combination of aesthetically pleasing high-resolution photographs, videos and added an installation element. Last was Ham Kyungah. She addressed the North/South Korea topic in her work inspired by the life of North Korean refugees/immigrants in South Korea. Her installation consisted of three works. There was a playful element – a room-in-a-room “painted” by a young NK-born football player kicking a paint-colored football around – there was a documentary element – a voice-only video (i.e. sound) coming out from behind a metal shop window curtain transplanted into the exhibition space – and there was a mysterious and strange element consisting of sterile white polished glass fiber sculptures whose connection to the rest of the show remained obscure to me. 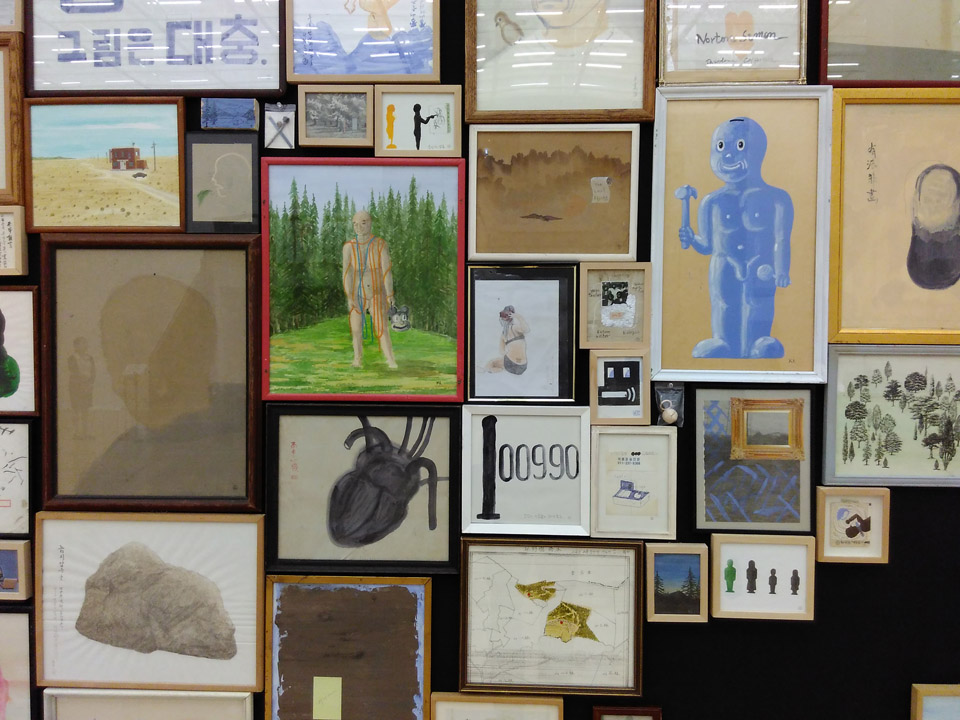 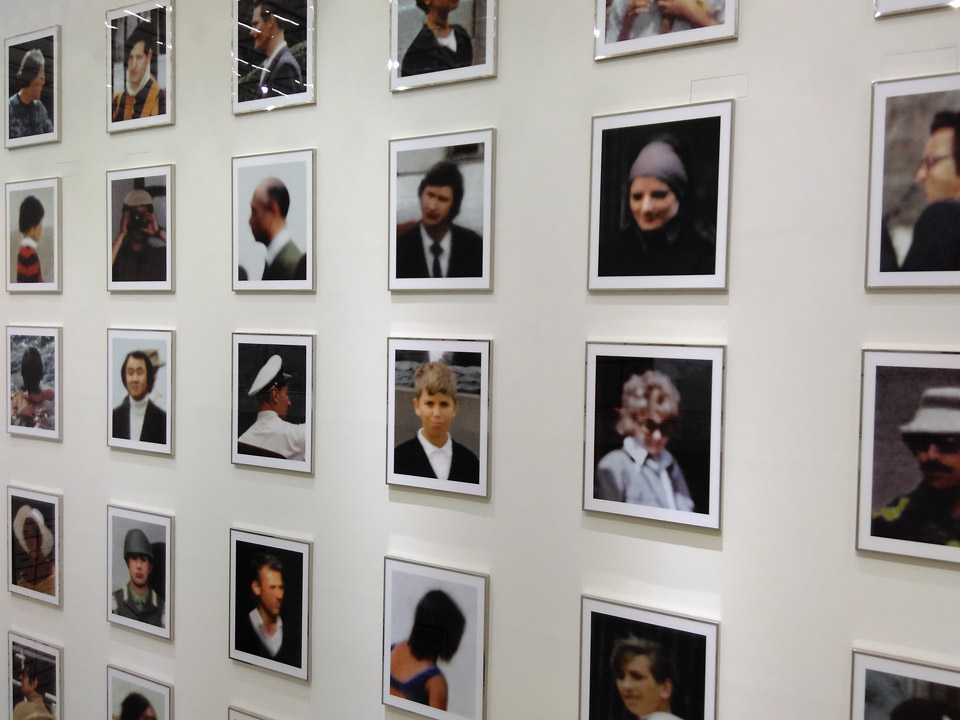 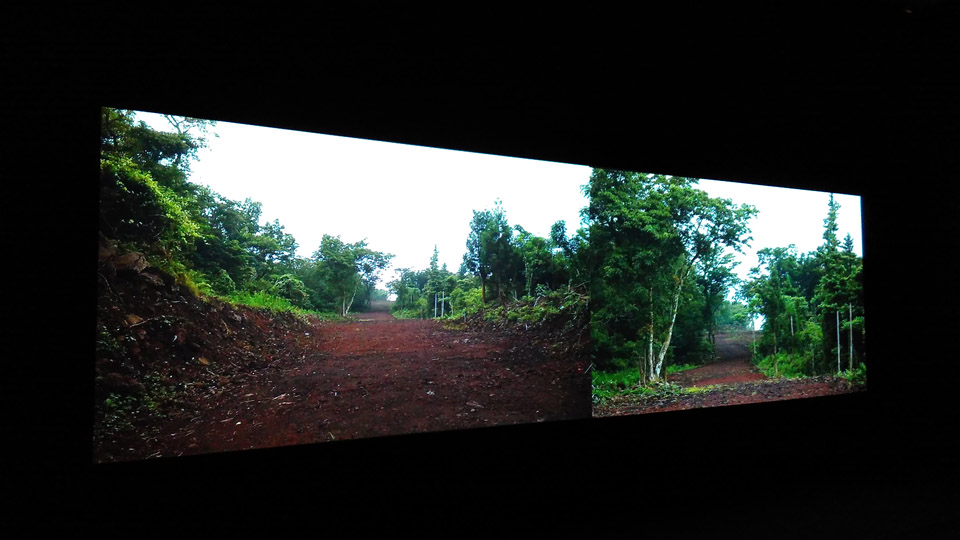 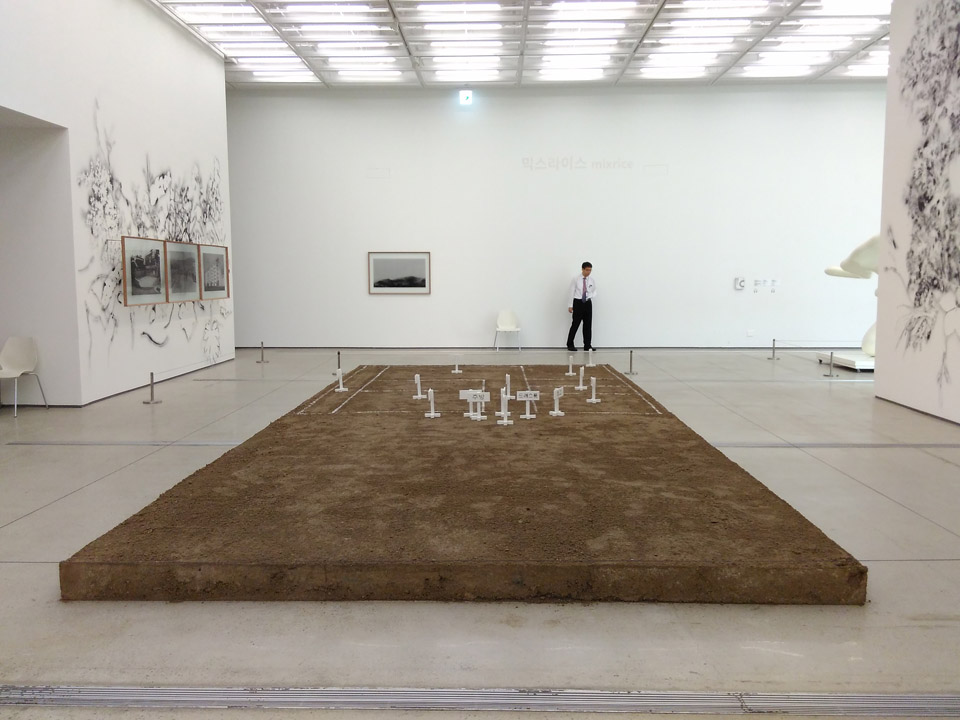 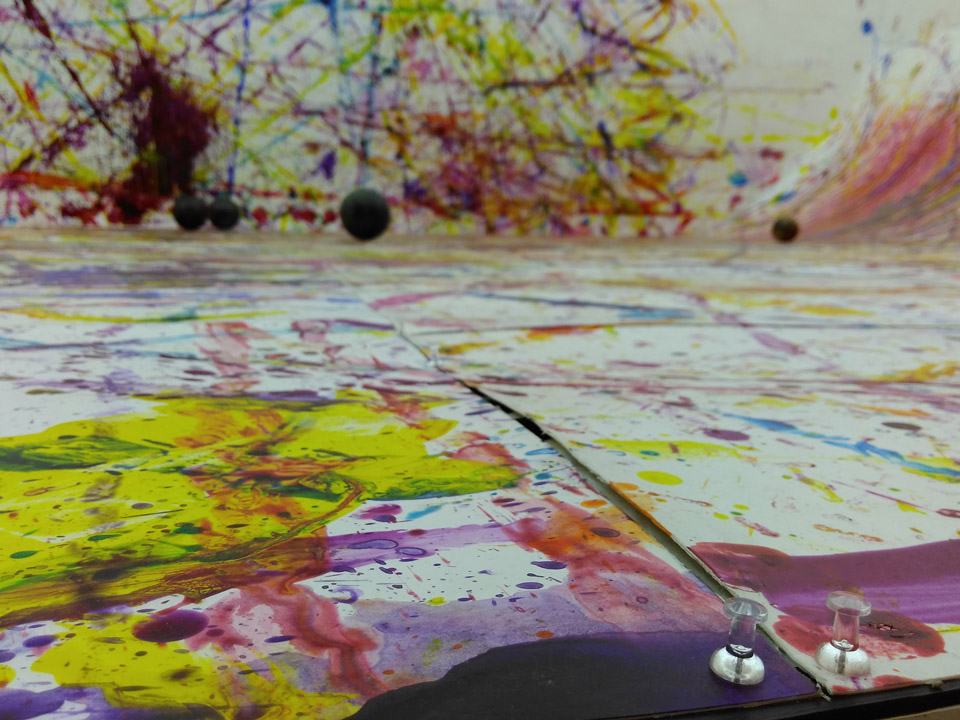 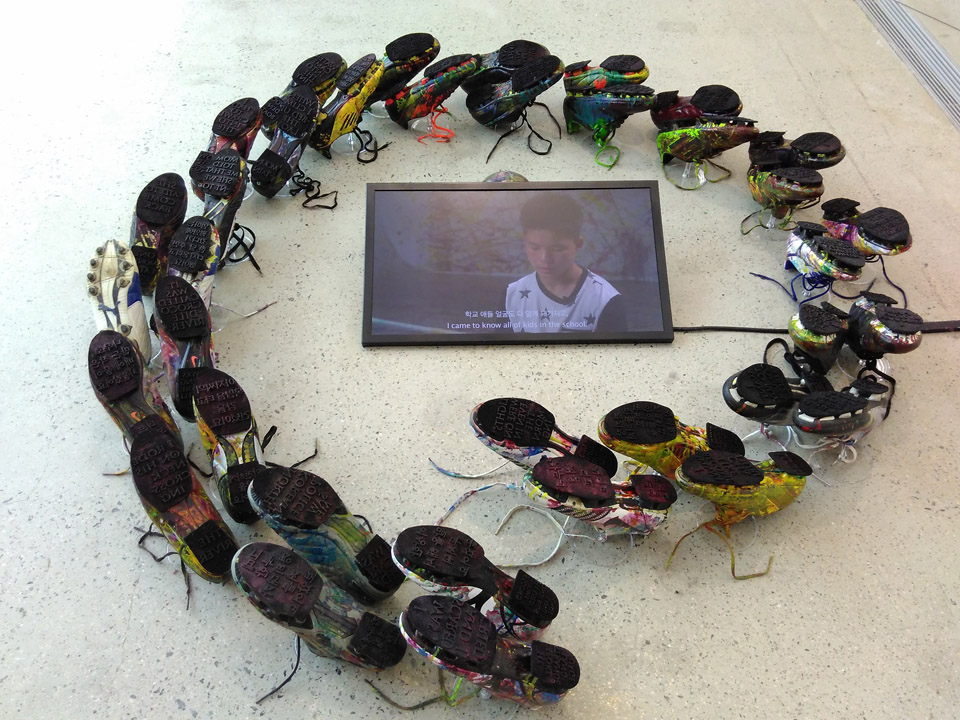 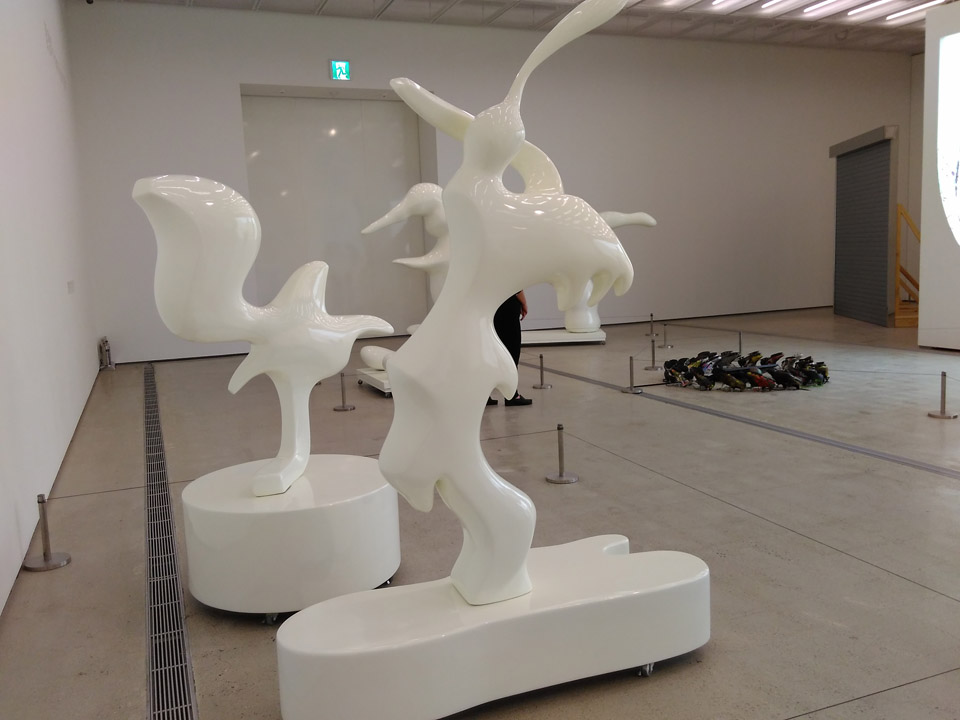 For me, mixrice were the winners (no official winner announced as far as I know so far). Even though the installation form was a bit overly aesthetic, it was clear that beyond that surface lies an interest and engagement with a specific set of problems. All elements of the installation also fitted together into a coherent whole. I missed this coherence in Ham Kyungah’s setup. Back Seoung Woo was a bit too dry and detached. And Kim Eull’s ego-galaxy was hard to compare with others. It was a valid approach but seemed like from a different era.

Next was the new project for the “Korean Air Box”, a huge empty atrium in the center of the museum  were previously Julius Popp’s bit.fall pulse was installed. It was a big relief that the new installation by the Yangjiang Group did not feature any ships, containers, sea water, clouds or other literal referents to the business of the sponsor’s mother company (Hanjin Group). Instead the new installation transformed the space into a kind of neo-calligraphic garden resting space, with huge calligraphies painted on the tall walls and a number of installations at ground level: a ring-shaped entrance known from Chinese gardens, fake plastic pine trees, etc. The human-centered and down-to-earth approach of the group was a welcome change from the industrial-megalomaniac feel of previous projects in the space. 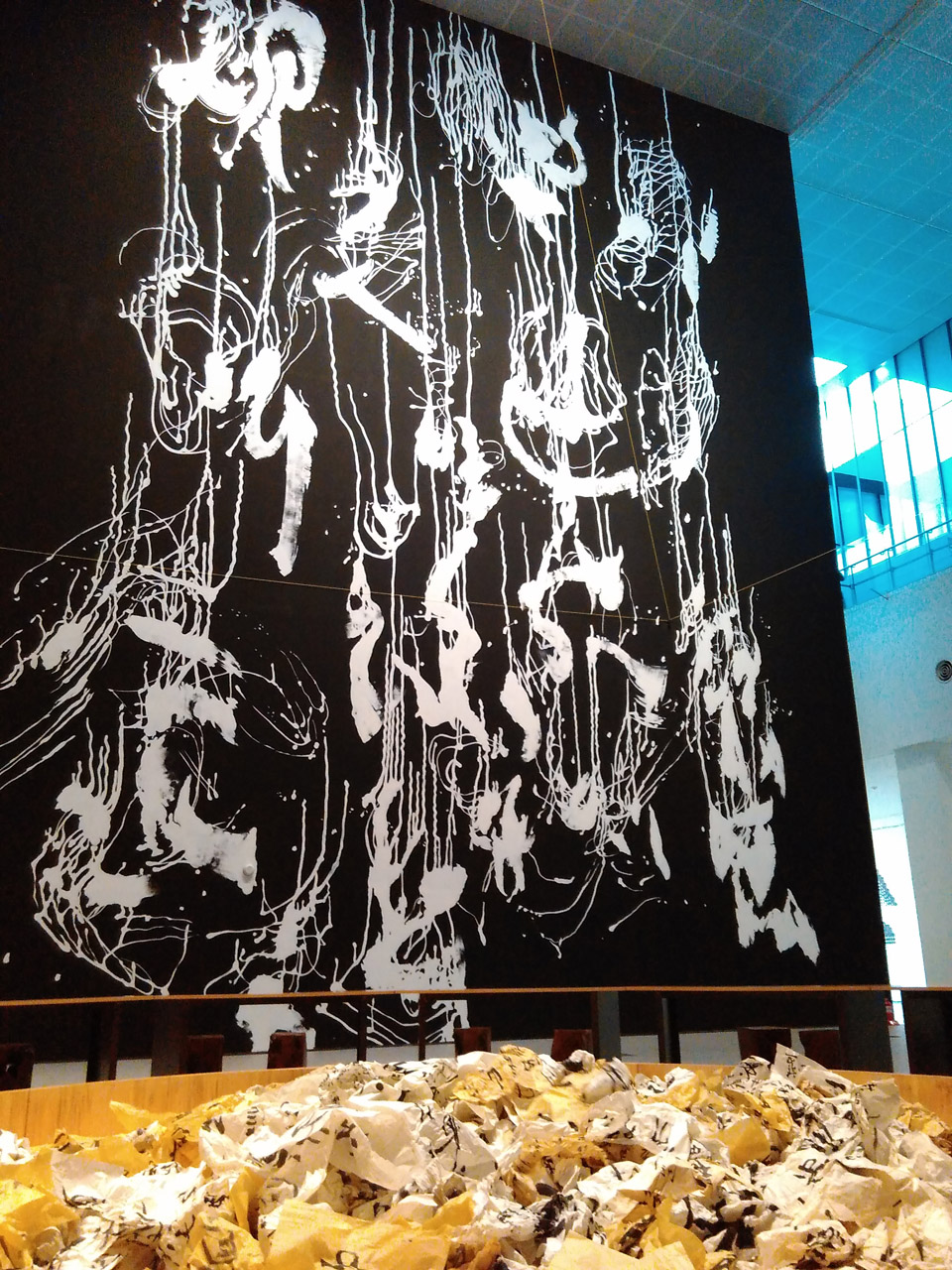 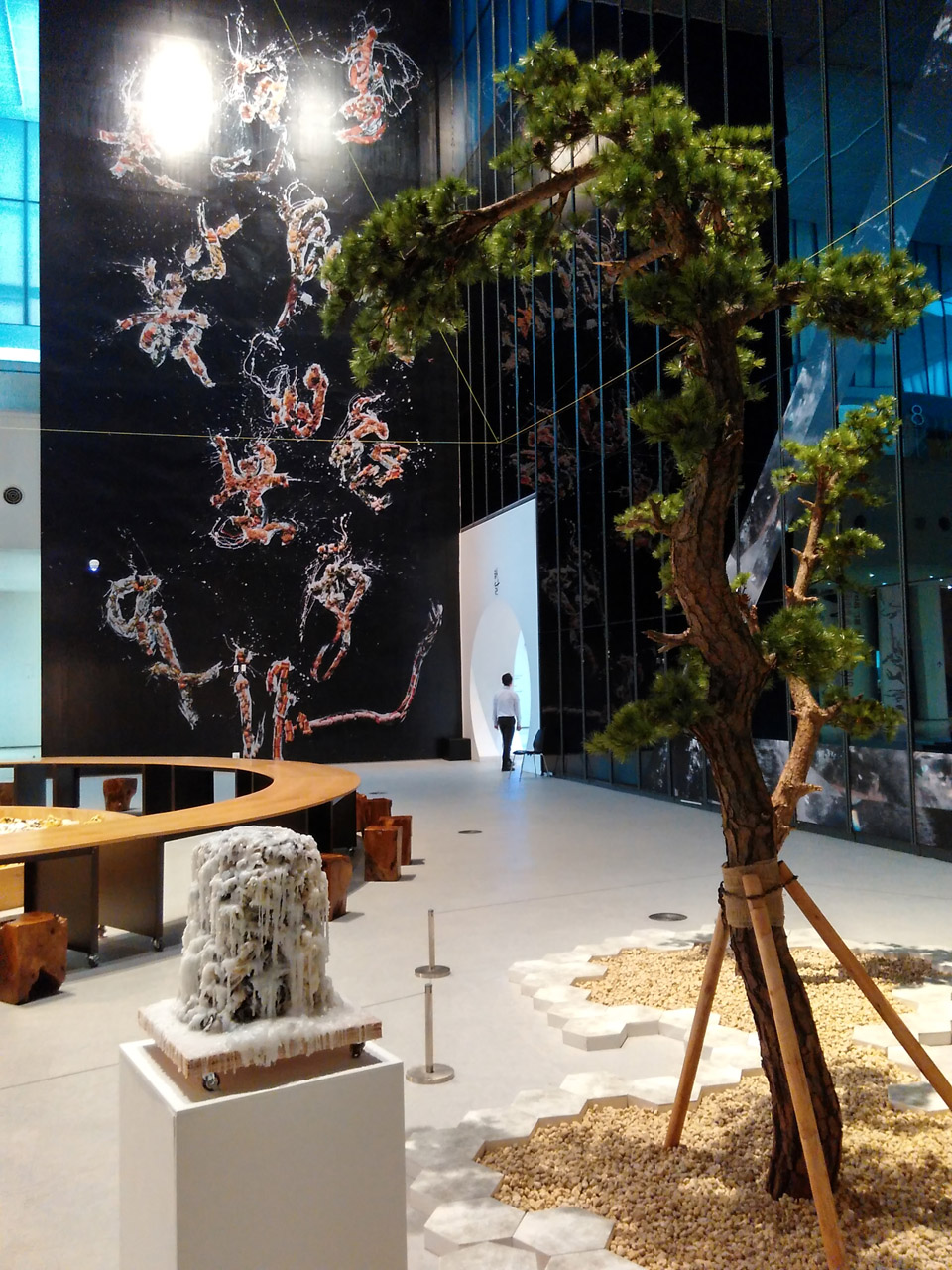 The exhibition “VOID” was a very strange creature. It was an exhibition about the void (the empty space) within the MMCA building itself. A number of artworks stayed beyond comprehensibility to me, but nevertheless, I welcomed this exhibition. Previously, I have raised the spookiness of some corners within the museum, especially the deep underground space of gallery 6. This exhibition indirectly addressed this issue, even though it did not solve it. The show consisted of artist’s reactions to the museum spaces. While meaning of most works shown in gallery 7, the media lab and the “void in MMCA Seoul” remained unclear to me, there was one very powerful work by Jang Minseung and Jung Jaeil (I saw their Sanglim Forest last year at Arko): They took over the whole gallery 6, consisting of a row of connected spaced descending deep into the underground. The space was left completely empty, and they filled it up only with sound and sparingly placed narrow beams of light that slowly changed in relation to the sound. Even though the music was a bit too melodramatic (Vangelis and Enya-like) for my taste (I wish they had invited Brian Williams a.k.a. Lustmord to sonify the space!), it was still very impressive and created a magnificent cathedral-like atmosphere. Leaving the space empty was the next best thing to filling it up with rocks once for all. At least the ghosts could roam around freely in the space, mingling in the dark with gallery visitors. 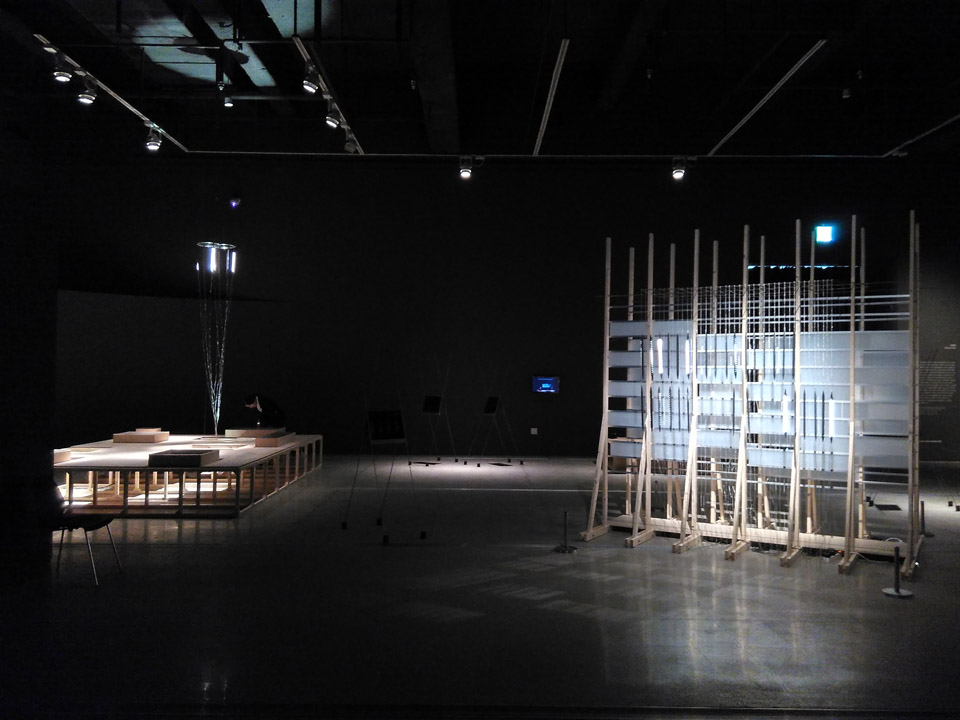 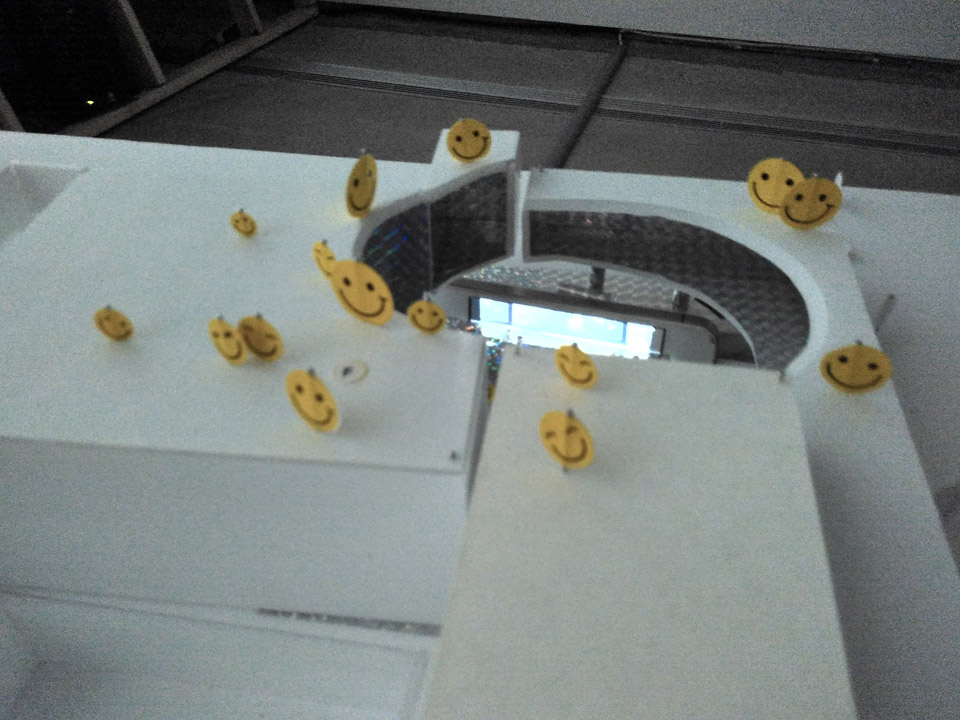 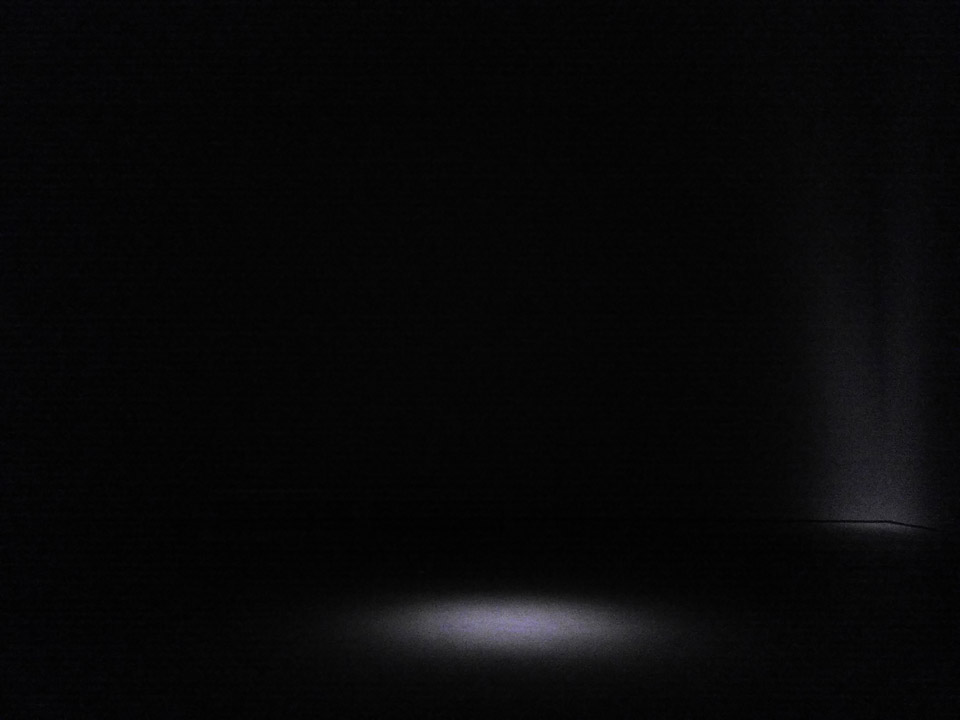 Once I climbed out of the dungeon, one more exhibit awaited. The “Craft Narrative” show was very unusual for MMCA: It presented the work of six traditional craft masters: Someone producing large resonant bells from copper and tin, some making large earthenware kimchi pots, hand-woven cloth, etc. This was the first time ever I saw such a show at MMCA. Surprisingly, I actually felt very good about it. It introduced tactility and warmth into an environment that overall feels very cold and austere. The exhibits could not be touched, but their organic, hand-made nature could be grasped with one’s eyes. I realized how the element of tactility and warmth was missing in the museum overall. Together with the Yangjiang Group installation, these two shows brought something into the museum that made it feel a bit more cozy and welcoming. I never thought I would praise such a traditional art and crafts exhibit in a contemporary art museum, but within the “voids” of MMCA, it was very much needed. I can of course also imagine the institutional-political rationale for this show, a narrative of greater openness and inclusiveness towards other art forms beyond the contemporary art world, and that’s also a good thing. 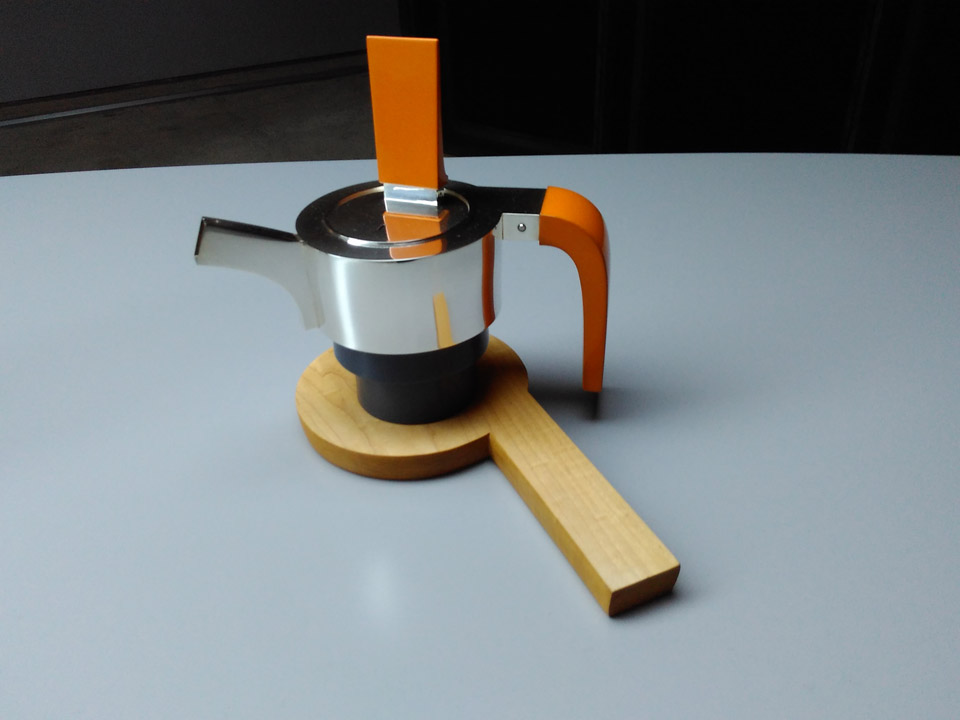 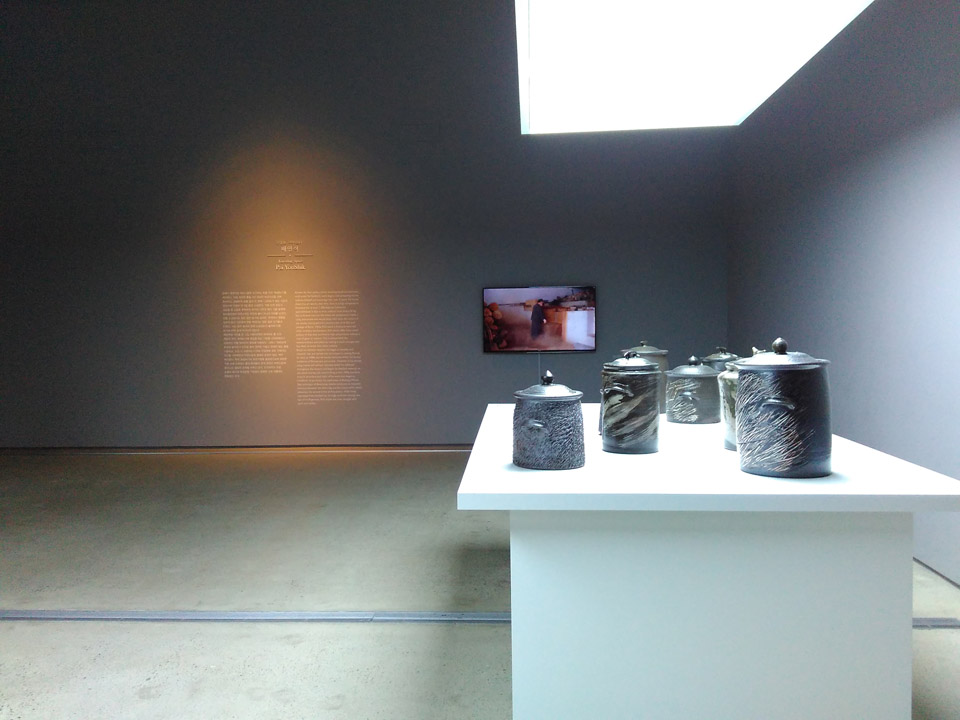 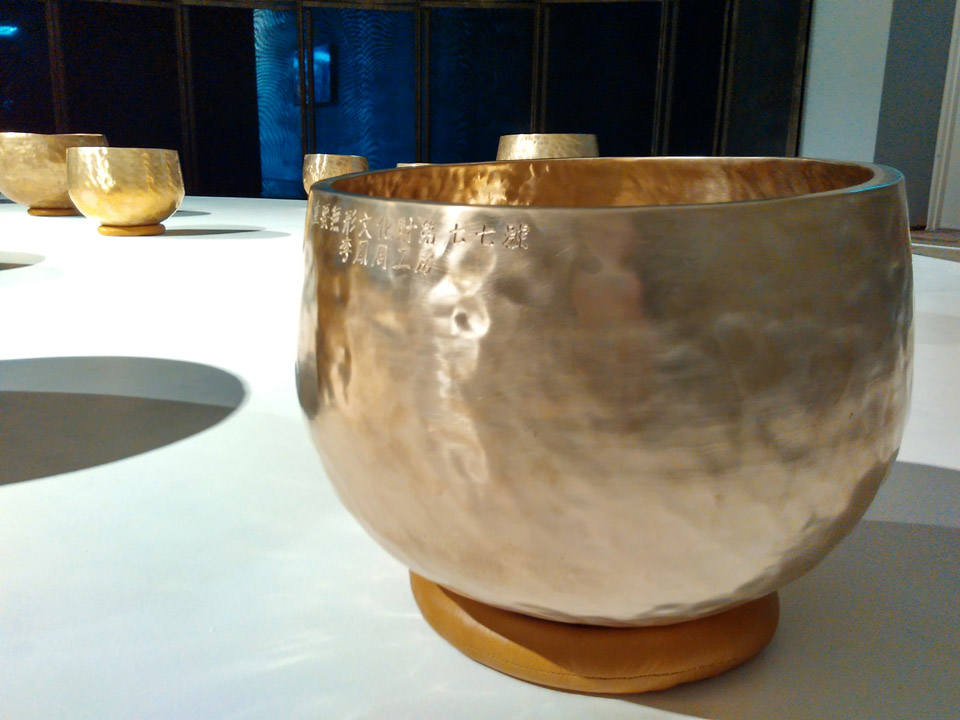 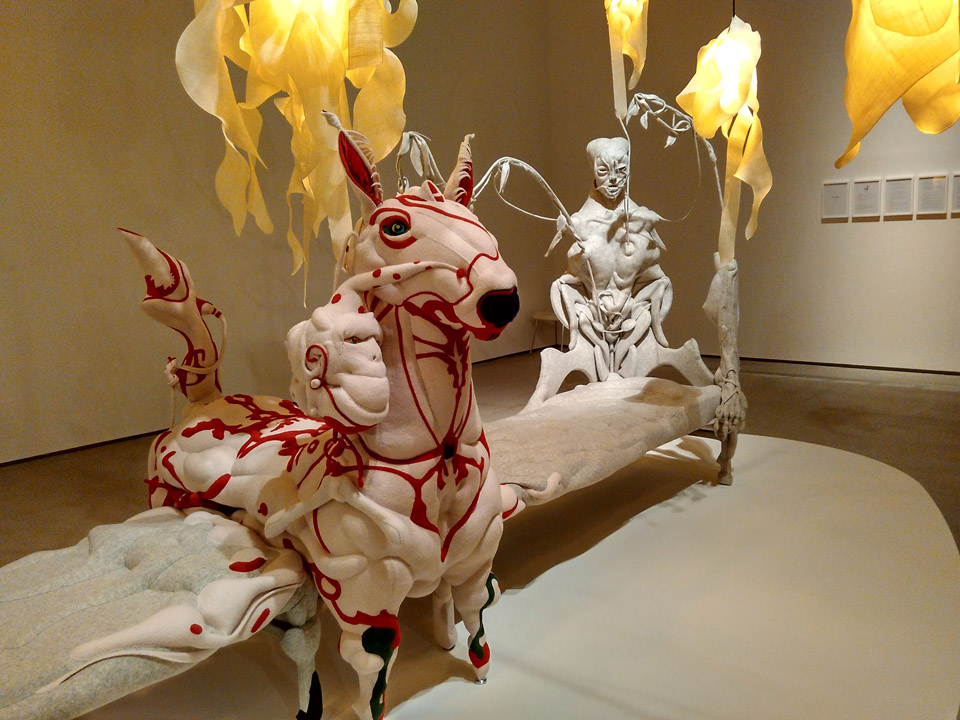